The chances are, you’re no strange to crossing a bridge. It may even be a daily occurrence in your commute to work, or a part of your work. But like everything else, there are a few exceptional examples that stand out from the norm. This article shows off the most amazing bridges found across all corners of the globe.

Building design software experts Oasys present the top five examples of bridges that went above and beyond basic design. 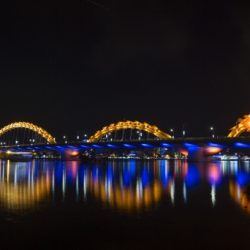 The Dragon Bridge in Vietnam is certainly unique, even compared to the rest of the bridges on this list. The bridge is the result of an international competition by the Da Nang People’s Committee in order to improve travel in the city. The bridge has six lanes for vehicles, two lanes for pedestrians, and 2,500 LED lights. Incredibly, the Dragon Bridge is fully capable of breathing fire too. In fact, the bridge can spout water or fire, and this display is often used for special occasions in the city.

The single-arched bridge is constructed from hybrid steel box girders. The dragon part itself is constructed from decorative plates that are placed to look like scales. The arches are fastened to the deck below with steel cabling, as well as reinforced concrete. 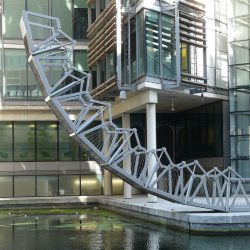 It may only be small, but this bridge isn’t lacking style. Created by Heatherwick Studios, the Rolling Bridge is a steel bridge that covers an inlet in London. What makes this bridge so unique is that it can tidy itself away! When needed, this bridge curls up into an octogen shape to stand on one side of the canal until a boat passes. The bridge also curls up every day at noon, if you want to see it in action!

The bridge has quite a bizarre inspiration too. The design and technology behind the bridge were purported to be inspired by the animation of the Apatosaurus in Jurassic Park, with silicon and steel mechanisms allowing for an imitation of natural movement. The structure measures in at 12 metres long, with eight triangular steel sections that can curl up thanks to a network of hydraulic rams along the bridge’s structure. 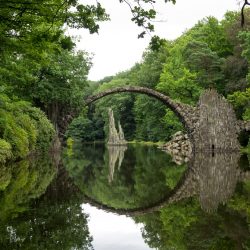 Photograph by A. Landgraf

Along with its reflection in the water, this bridge forms a perfect circle. The bridge is said to have been commissioned by a knight in 1860. But the rocks and stones used for its creation are jagged and spikey, so it was dangerous to cross. According to Earth Trekkers, there were other Devil’s Bridges built in the past as a masonry challenge. The idea was that only Satan himself could help with a difficult build such as these bridges, and the first human who crossed the completed bridge would pay for the Devil’s helping hand by giving up his soul. There isn’t much in the way of records regarding its construction, but the perfect semi-circle creation was certainly ahead of its time in terms of technological achievements!

The bridge can no longer be crossed as part of preservation measures. But it is still an oddly beautiful sight to behold! 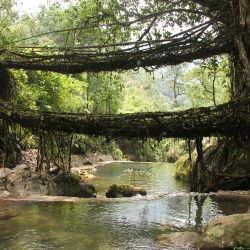 A lot of patience went into the creation of these stunning natural bridges. These beautiful bridges were formed by guiding rubber tree roots with hollow canes so that they would grow outwards and meet from either side of a stream. The ‘technology’ behind this method is based upon the natural of the tree roots’ behaviour. The roots of the rubber tree have a preference for anchoring themselves to nearby objects, including each other! Technically, the bridges are never completed, as roots can be set towards a living roots bridge in order to support it throughout its life, or add to it.

Though they take years to fully form, once they do, they can easy support the weight of a human. They were originally made by the Khasi tribe, who realised the bamboo bridges they were building would collapse or rot after a monsoon or heavy storm. 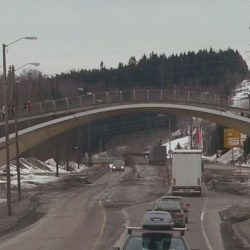 There was a different sort of patience involved in the creation of this next structure. This bridge was originally designed nearly 500 years ago by Leonardo da Vinci, with the intention of being built across the Golden Horn in Istanbul. The original drawing had a single span of 240 metres, but the project did not go ahead as it was believed that such a design was not feasible. Their concern was certainly understandable, as the mathematics behind the bridge’s ability to support itself would not be realised until the 19th century. Essentially, the bridge relies on the ability to support itself with each arch leaning on the other and keeping each other firmly in place.

This bridge serves as the first of its kind, as it was a major engineering feat completed from a da Vinci drawing. The bridge has just three arches to support the structure. Though the Norwegian bridge is a smaller version of the original plans, it shows that the design works — one arch under the bridge, and two arches either side leaning inwards to spread the weight.