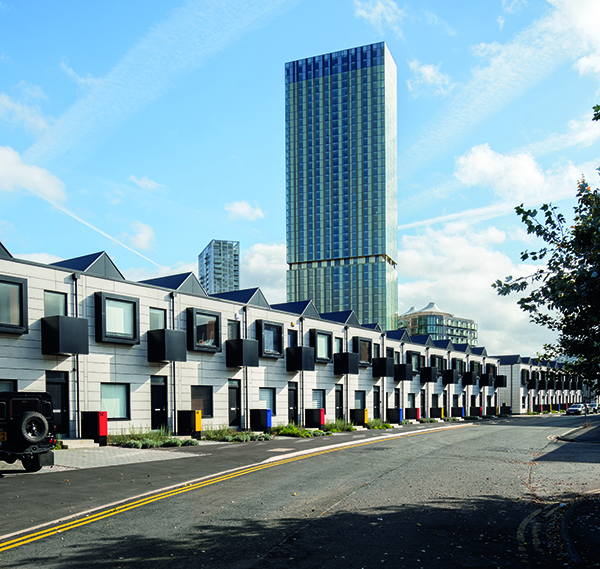 Designed by shedkm, sold by Urban Splash and winner of the 2019 Offsite Awards ‘Housing Project of the Year’ category, the Irwell Riverside scheme is a development of 72 contemporary, prefabricated houses. All placed on a previously derelict site that connects Salford and Manchester, the tree lined neighborhood is only a short distance from the city centre.

shedkm have been working with Urban Splash for over 20 years, and developed the modular housing product with them over a period of 6 years. They also worked on two other sites before Irwell Riverside; New Islington in Manchester, and Smith’s Dock near Newcastle.

Irwell Riverside gained planning permission in summer 2016, started on site later that year and was completed in September 2018. It was a larger site than the previous two and it seemed the perfect place to roll out the modular houses on a larger scale.

The brief shedkm were given was fairly open; the site had been derelict for many years, and various proposals for the site by other architects hadn’t managed to get off the ground.  For shedkm and Urban Splash it was a case of how many houses could fit onto the site and how they could be arranged to create a successful place.

Darren Jones of shedkm explains their approach to the design:

“Because the site had been derelict for many years, a lot of plants and shrubbery had grown up. The resulting habitat was quite important in terms of providing a green space for the neighborhood. It was an already established environment, close to the river and the city centre. The site had an almost a rural feel when we first visited it.  We decided we wanted to retain something of this rural backdrop, creating a green link between Manchester and Salford; we wanted to retain the greenness of the site.

“When it came to developing the site then, it was all about retaining the existing trees (and supplementing them with new ones) and maximising views from the houses to the river walkway.  We did this by creating a terrace pattern that knits into the surrounding streets. We added strategic breaks within these streets to maximise views towards the river.”

“Our houses are primarily about three things. Firstly, they are modern, generous, light-filled spaces with large windows and tall ceilings.  The second is that they are assembled in a factory, allowing them to be built much more quickly and to a higher degree of quality.  And thirdly, this opens up the opportunity for purchasers to have a say in the design of their house.

“We have developed 27 different plan layouts. Customers can choose layouts on a ‘pick and mix’ basis – if they want one floor more open plan, or more cellular, they can choose that.  They can compose their own house to suit their own needs; and once they’ve picked the layouts they choose kitchen types, bathroom types, finishes and colours. Overall, there’s a huge array of different items the purchaser can pick to suit their demands and budget. And then the houses are built to order in the factory and delivered to site fully finished.

“It takes just over two weeks to build a house in the factory and then it is delivered to the site, connected up, and is ready to be handed over to the purchaser within a few weeks.
“The feedback has been really positive, people love the design of the houses and almost all of them were sold in advance. People like the modern feel of the houses because they’re light and airy with big windows, and a contemporary feel inside and out.”

Darren added:
“When we developed the first houses at New Islington, there were some fears that prefabrication can have connotations with poor durability, but most people didn’t seem to share those perceptions; they were more interested in the quality of the space. When they actually saw the quality of the build it didn’t matter to them if it had been built on site or in a factory.
“This housing is about raising the profile of offsite construction and demonstrating what can be done. It’s important that we get out there and show what can be done and the enormous potential of factory built houses.”