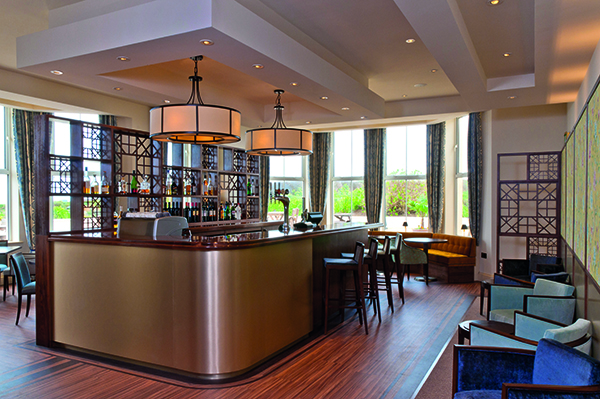 Mullion Cove Hotel is currently undergoing a refurbishment project. The bar, bedrooms and the self-catering harbour view apartments have just opened with the spa set to follow in summer.

Built in 1900 for the Great Western Railway, the Mullion Cove was popular with Edwardian holidaymakers as a base for exploring the Lizard peninsula. In glorious isolation above a historic fishing cove, there are far-reaching views towards Land’s End and glorious sunsets from this cliff-top eyrie. The coastal footpath runs past the door, giving access to sandy beaches.

Anna Hart, the founding director of Hart Miller Design told Premier Hospitality Magazine of their relationship and involvement with the hotel:

How did you get involved with the project?

“Hart Miller were initially approached in 2011 to look at a project that was being scoped at the Hotel by the now Managing Director Matthew Grouse. Hart Miller founding director Anna, had in a previous role led a refurbishment project for the Watergate Bay Hotel, and although Mullion Cove did want to follow in their footprints they did want to embark on a similarly long term improvement plan over the coming years.”

What was the original design brief like? Was there flexibility with it?

“The original brief was to create a bar bistro dining room that would allow resident guests to enjoy a pre-dinner drink and offer non-residents a destination for bistro dining. This was a great opportunity for Hart Miller as we weren’t restricted by an existing design direction but were able to use this first phase of works to deliver a high calibre project – setting a new standard that continuing refurbishment projects would benchmark.

“Since 2011 over a rolling programme we have repositioned the offering of the premier rooms, sea view rooms, suites and standard rooms as well as a refresh of the restaurant and studio space. In addition, we have worked with the hotel on the design and delivery of a selection of self-catering apartments, Harbourside.

“Our current work is going to be a game changer for the hotel with the new build Spa project underway, due for completion Summer 2019 and a second phase of self-catering apartments, Harbour View.”

What are the highlights of the newly designed space?

“The newly designed spaces bring a feeling of real luxury to the guest experience. Staying at Mullion Cove is unique, firstly by its location, and also it’s level of personal service is a delight – we have created interior spaces that match. The hotel was built in the 1900’s and has some beautiful architectural details from the Art Deco period – we’ve celebrated these details through our design approach in rooms and dining spaces alike.

“The spa will be the crowning jewel to our work with Mullion. An intimate and special experience awaits guests. We’ve carefully planned the guest journey with General Manager Daniel Thompson and therefore the experience should feel calming and intuitive from the point of arrival. Lighting designer David Amos has joined our team for this project to ensure that we make the experience the very best it can be.

“In tandem we are completing the latest self-catering apartments. These are set at a high vantage point enjoying outstanding harbour views – hence the name. The interior spaces build on the signature style we developed for Harbourside Apartments, meticulously space planned to maximise each room.

“Guest can enjoy the collection of MARK, Ercol and Neptune furniture complemented with a materials palette that gives a nod to the nautical location and a hit of contemporary pattern in wallpapers and feature fabrics.”

How long were you working on the project for?

“We have worked on Mullion every year at varying times from periods of 3-6 months depending on the scale of the project and time on site.”

Were there any challenges?

“Each project presents challenges along the journey – as designers you’re championing the client’s aspirations and pushing the brief to be the best it can be. We balance the pros and cons of different elements along the way. In true British form the weather is the current challenge – there is a very big hole in the ground for the Spa and a schedule that means we need the weather on our side.”

“We’ve been delighted with the feedback from guests as they’ve seen the hotel evolve. The first project was a real highlight as guests who were residents wanted to do more than just have a pre-dinner drink in the Glenbervie Bar – they wanted to dine and experience it as part of their stay. That, from our perspective meant we’d done a good job.”

How important was it for you/ your company to be involved in this project?

“At Hart Miller, Anna and her team have enjoyed the evolving relationship with the hotel. Most importantly it’s about the relationship, we like working with the team who take these projects forward. Both businesses have grown in the relationship and are positioned to enjoy the benefits of all the hard work.” 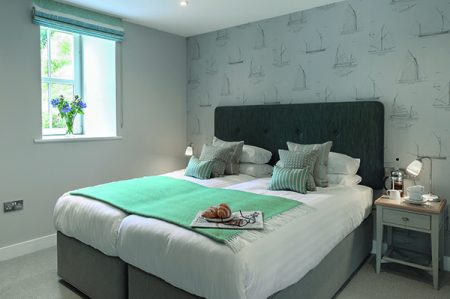 D & J Bray Plumbing and Heating Ltd specialises in central heating works across all sectors, from domestic to commercial to industrial.

D & J Bray is a family-run business that currently spans four generations. Based in Mullion, Cornwall, the company was recently responsible for a complete refurbishment of the commercial hot and cold water system and central heating system at the Mullion Cove Hotel. D & J Bray has worked on the Mullion Cove Hotel across four generations, as Director Jonathan Bray explained:

“There’s a continuity of 60/70 years of work through four generations of our family business. There’s a lot of work that my father and grandfather have done that we’ve since taken out and upgraded!”

Other projects in the company’s portfolio include Lifeboat Stations for the RNLI and hotels, guest house and private properties, working in conjunction with architects to design, specify and install the best heating systems for each project. Jonathan added:

“We don’t just work for large companies and builders; we do the whole range – from a boiler change to a new heating system. We work predominantly in the private sector and most of our work is obtained via recommendations.

“We’re very proud of our heritage as a family business spanning four generations. I was always taught by my father that you’re only as good as your last job. This means we take great pride in the standard of workmanship and the service we offer.”