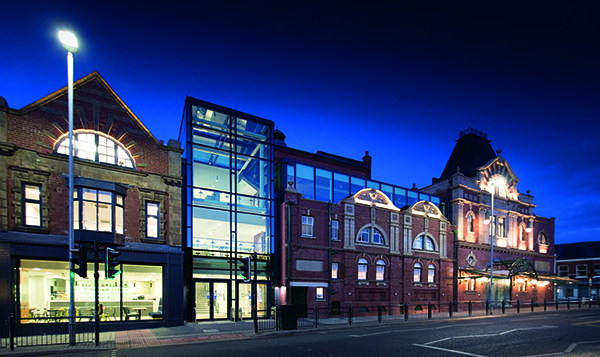 The restoration, remodelling and extension of a much loved Grade II Edwardian Theatre to create Darlington Hippodrome & The Hullabaloo, won the project a place on the shortlist of the RICS North East Awards 2019.

Designed by Space Architects, with Wilmott Dixon as main contractors for the scheme, the project is shortlisted in the Building Conservation category.

The scheme has achieved the successful restoration of the distinctive historic exterior and beautiful heritage auditorium, whilst at the same time creating outstanding contemporary accommodation housing public and technical facilities including new entrances, foyer spaces, galleries, bars and cafes, heritage and education resources as well as a new children’s theatre.  The scheme as a whole has become a cultural hub and a focus for community activities.

The theatre was built in 1907 and opened its doors as the New Hippodrome & Palace Theatre of Varieties. It was soon established as a premiere music hall, attracting internationally acclaimed artists such as the famous Russian ballerina Anna Pavlova.

The principal frontage of the building is practically as built, in red brick with terra cotta dressings in a carefree Baroque manner, the entrance pavilion symmetrical, with Ionic pilasters at first floor level, carrying a scroll gable and semi-circular lunette with exaggerated voussoirs. Over the gable is a pyramidal roof with iron cresting.

In addition to restoring the Hippodrome’s exterior and the beautiful Edwardian auditorium, the scheme included the creation of a stunning vaulted function room in the former water tower, as well as improved seating with more leg room and disabled access, including two lifts providing access to all levels both front and back of house.

Seating was increased to 1,000, which together with improved back stage facilities for touring companies, enables larger shows to be accommodated.

The creation of the new accommodation and remodelling of existing spaces meant that piecemeal internal modifications could be removed, with the original auditorium, foyer and grand staircase being restored to their original Edwardian splendour.

Importantly, the theatre’s heritage was also preserved by restoring many of its Edwardian features, with a heritage gallery offering a permanent record of the theatre’s colourful history.

The project also transformed the neighbouring former fire station into a children’s theatre – the 150-seater The Hullabaloo – sweeping away a century of poorly maintained add-ons and extensions.

The children’s theatre has its own entrance and foyer, but is linked to the main theatre via a new single-storey glazed structure. Similarly, a glazed ‘incision’ facing the road acts as a beacon and separates the theatre structure from the adjacent shops.

This flagship theatre offers opportunities for collaborative working with the Hippodrome by staging events specifically for children, young people and families.

This element of the scheme was funded by Arts Council England and Darlington Borough Council. 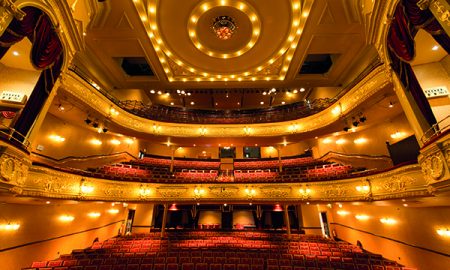