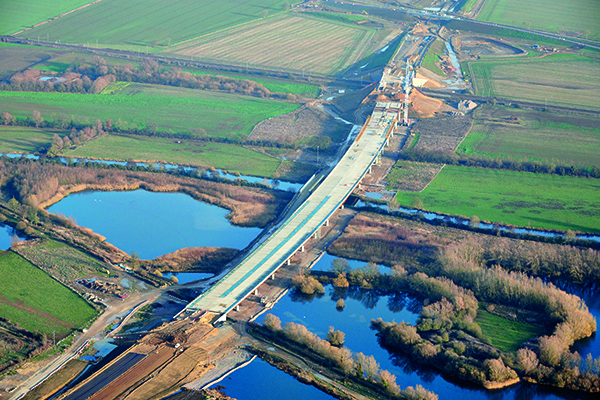 Better journeys on the A14 are one big step closer now that construction has been completed on the biggest bridge in Highways England’s £1.5 billion A14 Cambridge to Huntingdon upgrade.

The River Great Ouse Viaduct stretches for half a mile and, when it is open to traffic, will take the new A14 over the river and the East Coast Mainline Railway. It is part of a brand new 17-mile bypass that is being built to the south of Huntingdon away from the existing A14 and will link together the other four miles of the A14 being transformed in Britain’s biggest road upgrade.

The £1.5 billion scheme will transform journeys on one of the East of England’s most vital roads, and the completion of the viaduct is the latest piece of the puzzle to be put in place.

Now, Highways England is sharing a time-lapse video showing the work that has gone into creating the huge bridge since it began in November 2016.

Willie McCormick, Construction Director for the A14 Cambridge to Huntingdon improvement scheme on behalf of Highways England, said:

“This viaduct over the River Great Ouse, south of Huntingdon, is by far the biggest bridge on our 21-mile project. It’s taken over 18 months to build, and covers 747 metres to carry drivers over the river and floodplain – yet when it opens to traffic in 2020, drivers will cross it in less than 30 seconds.

“Our hardworking team is building 34 new bridges and structures as part of this epic project to deliver a new and improved A14 between Cambridge and Huntingdon for the 85,000 vehicles a day who drive it. We’ve already opened nine of these to traffic, but around three quarters of the work we are doing is off the existing road network and unseen to drivers. 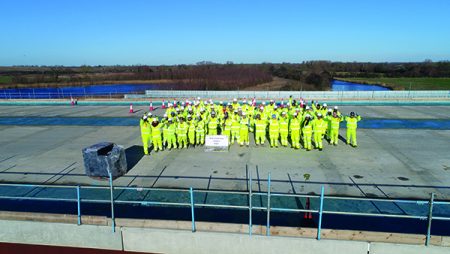 “We have up to 2,700 staff working on the A14 most days, and it has been remarkable to see this new road emerge as we have moved earth and delivered a wide array of structures. We’re over half way through delivering the new A14, and this video will show people the hard work that is being done that they can’t see, and understand just how much has been done since work began in November 2016.”

Some 64 pillars are needed to carry the viaduct over the River Ouse floodplain, each around two metres wide and embedded up to 30 metres in the ground. The pillars support the 17 spans of steel beams and concrete slabs which form the bridge deck. When the new A14 fully opens by December 2020, the bridge will help to reduce journey times on the road by up to 20 minutes.

Highways England is upgrading a 21-mile stretch of the A14 between Cambridge and Huntingdon to three lanes in each direction including a brand new 17-mile bypass south of Huntingdon, with four lanes in each direction between Bar Hill and Girton. The River Great Ouse Viaduct is one of 34 main bridges and structures on the project. Once the new road is open to traffic, it will add capacity, boost the local and national economy and cut up to 20 minutes off drivers’ journeys.

Innovative working by in an on-site prefabrication yard has helped the team complete the viaduct structural work for £4 million less than anticipated by using more traditional methods, while also making it safer for the workforce with less time spent working at height.

Main construction on a project to upgrade 21 miles of the A14 between Cambridge and Huntingdon started on Monday 28 November 2016 and is on target to be opened to traffic by December 2020.

Since work started, more than eight million working hours have gone into the project, and eight million cubic metres of earthworks have been moved across the site – equivalent to more than three Great Pyramids of Giza. Nine new bridges and structures opened to traffic last year and construction is well underway on 25 more. Along the way, the project team has started delivering extensive protection for the environment and uncovered astonishing archaeological finds which shine new light on thousands of years of history.

It is being delivered as part of the Government’s £15 billion Road Investment Strategy, the biggest programme or road improvements since the 1970s. Last week, Highways England announced the proposed route for major improvements to the Black Cat Roundabout and a new 10-mile dual carriageway linking Cambridgeshire and Bedfordshire, while a consultation into plans for a multi-billion pound Lower Thames Crossing attracted a record number of responses at the end of 2018. 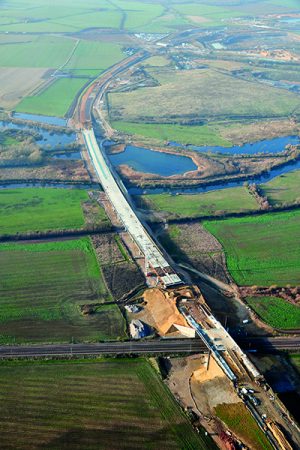