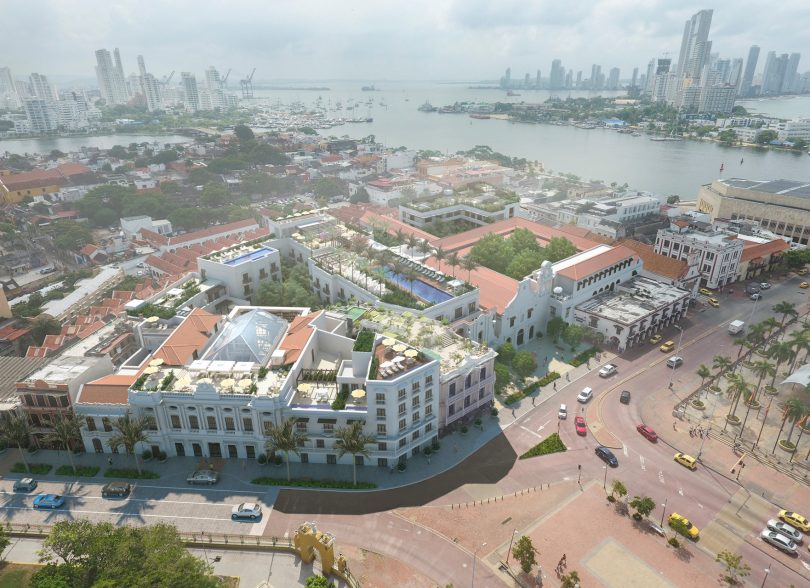 Four Seasons Hotels and Resorts, the world’s leading luxury hospitality company, and San Francisco Investments, a subsidiary of Valorem, a business group with ownership of Colombia’s leading players in media, entertainment, retail and renewable resources, announce plans to open a luxury hotel and private residences in Cartagena, one of South America’s most historic and attractive seaside cities.

Located on the doorstep of Cartagena’s historic walled city, a UNESCO World Heritage site, Four Seasons Hotel and Private Residences Cartagena will revitalise and restore several culturally significant buildings dating as far back as the 16th century, including the Cloister of Saint Francis (Claustro de San Francisco) that includes the 16th-century Saint Francis Church; the Club Cartagena, a 1920s Beaux Arts masterpiece; and four renowned theatres, Teatro Cartagena, Teatro Calamarí, Teatro Bucanero and Teatro Rialto. These buildings will be brought to life once again through a careful restoration aimed at preserving the iconic facades and historic architecture. Nestled within the lively Getsemaní neighbourhood, the Hotel and Private Residences will provide guests and residents with convenient access to Cartagena’s vibrant culture and entertainment scene, and its picture-perfect architectural landmarks.

For those looking to explore the Caribbean seaside and island beaches, the nearby Bodeguita Pier allows guests to embark on adventures to Barú Island or the famed Colombian archipelago Islas Corales del Rosario. Business travellers will also have direct access to the city’s convention centre located adjacent to the Hotel.

“We are proud to partner with the iconic Four Seasons brand to build a new luxury Hotel and Private Residences in the vibrant city of Cartagena,” says Carlos Arturo Londoño, President, Valorem. “Paired with Four Seasons exceptional service, the newly restored Hotel and Private Residences will be the most sought-after destination to live and visit and will transform the hospitality landscape in Cartagena.”

“This new Hotel and Private Residences is the perfect project for us to expand our presence in South America, providing us with the rare opportunity to convert such an exceptional collection of historic buildings within a marquee location in one of the region’s most alluring cities,” says Bart Carnahan, Executive Vice President, Global Business Development and Portfolio Management, Four Seasons Hotels and Resorts. “Together with our partners at Valorem, we look forward to bringing the very best in luxury hospitality to Cartagena.”

With interiors designed by François Catroux and Wimberly Interiors, the new Hotel will feature 131 rooms, including a Royal Suite and a Presidential Suite boasting 4,200 square feet (390 square metres) and 3,500 square feet (325 square metres) of living area respectively. The Hotel will offer six unique AvroKO-designed food and beverage concepts with both indoor and terrace dining as well as the stunning atrium lounge at the heart of the Club Cartagena. The rooftop pool will offer clear views of the Cartagena Bay and the ancient walled city where guests can enjoy the pool bar and grill while relaxing on private cabanas and day beds. A signature Four Seasons spa as well as fitness centre will also be available for those yearning to relax and rejuvenate their body and mind.

Four Seasons Hotel and Private Residences Cartagena will also include approximately 16 Private Residences, the first branded residential alternative in the Historic District marked by the highest levels of personalised Four Seasons service. The Hotel will also include 16,000 square feet (1,485 square metres) of meeting and event space, all of which located inside splendid historical spaces.