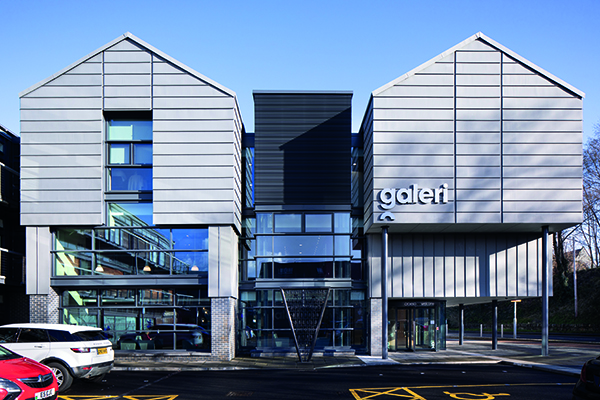 Following an ACW-funded feasibility study in 2014, a major extension of the Galeri in Caernarfon, undertaken by Richard Murphy Architects, now provides two new film theatres at first floor level, above a new public entrance and reception for the whole building, plus new office space, boardroom, classroom/exhibition space, toilets, green room and ancillary space. This has released the existing theatre, previously doubling up for cinema use, for a larger programme of live performances.

Plugging into existing circulation for level access on all three levels, its form continues the warehouse like appearance of the existing centre with a series of parallel, pitched roof volumes separated by a rectilinear plantroom – reusing an industrial building type that typified the historic dock side area in the heyday of the Victorian slate mining industry. Materially, a palette of mostly slate grey is employed, with the extension clad in robust, standing seam zinc sheet, emphasising the volumes of the cinema spaces within. Glazing is applied to the ground floor and south-facing double-height foyer and entrance, which looks into the three-sided external courtyard formed by the extension.

Arriving at the new prominent entrance, you pass the timber-clad craft-shop, which can be locked up at night with sliding/pivoting doors. The angled reception desk directs you towards the busy original atrium, where stairs and a lift lead to balcony walkways, opening out into the new upper foyer for the cinemas.

Construction commenced in early 2017 with the site opening in mid-2018. The sites inclusive design was developed with access consultants and a local action group. Whilst the new cinema and other spaces serve more than one artistic and commercial purpose, its main effect has been transforming the whole feeling in Galeri, and in raising the perception of the centre as a place where there is always something happening.

The extension was officially opened by actor Rhys Ifans in September 2018 to unanimous popular acclaim. The extension has completed the centre and, although a period of 15 years separates the original building from the extension, the design makes it feel seamless both externally and internally. Following its completion, the project has been shortlisted for a 2019 Royal Society of Architects in Wales (RSAW) Welsh Architecture Award – the first stage of the regions RIBA Awards 2019. Regional Award Winners will then be considered for a RIBA National Award and winners of RIBA National Awards are then put forward for the RIBA Stirling Prize.