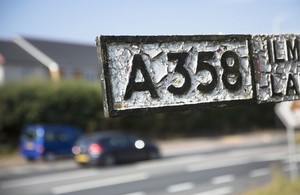 Plans to deliver improvements on the A358 between the M5 at Taunton and the Southfields roundabout on the A303 have moved a step closer after the preferred route was announced.

After two rounds of consultation and careful consideration of feedback a scheme to upgrade the route to a high quality dual carriageway has been revealed by Highways England.

The proposal is a modified version of the Pink option presented at consultation in early 2018 and will run from Southfields roundabout to junction 25 of the M5 at Taunton. To improve the affordability of the scheme we used the previously published Pink option as a basis to develop a modified option, as this had performed the best across our previous assessments.

Project manager, David Stock, said: “The A303 /A358 is a vitally important route to Taunton, Somerset and the south west and that is why we are so committed to finding an appropriate solution to upgrading the section between the A303 and M5.

“We received over 2,650 responses during the two consultations and around 60% of people said that the Pink route would best serve their regular journeys. By removing two junctions and the link between them from the original Pink route proposal we have been able to address some of the concerns about the impact of the Pink option on homes, public open spaces and countryside whilst managing affordability.

“I am very grateful to everyone who took part in the consultations for helping us shape the proposal and we look forward to working on the more detailed designs for the scheme as the year progresses.”

Under the proposal traffic through Henlade will be reduced by almost 90%.

The scheme will also make journeys safer by closing existing road junctions and other private accesses directed onto the A358, where traffic turns across on-coming traffic – replacing them with several slip road type junctions. Improved connectivity and reduced journey times will assist the local and regional economy by making Taunton, Somerset and the south west a more attractive place to work and do business.

The Government’s Road Investment Strategy is committed to upgrading all remaining sections of the strategic A303/A358 corridor between the M3 and M5 to dual carriageway standard.

The plan for the A358 upgrade is to create a free-flowing section of high quality dual carriageway, delivering a range of benefits to drivers including faster and safer journeys. The other two projects on this corridor in the Government’s first road investment period are the A303 Stonehenge and the A303 Sparkford to Ilchester dualling schemes.

The A358 is currently managed by Somerset County Council and is a mix of single and dual carriageway, carrying more vehicles than it was designed for.

Highways England has started an A358 Community Liaison Forum, with representatives from local groups, business organisations and community representatives, who will be able to feed in to the proposal as more detailed plans are prepared for a further consultation, before final plans are submitted as part of the planning application process.

The ongoing work to identify an affordable solution is delivered while still meeting the Road Investment Strategy brief, has had an unavoidable effect on the scheme programme. We are now planning to start construction of this route in the second road investment period.