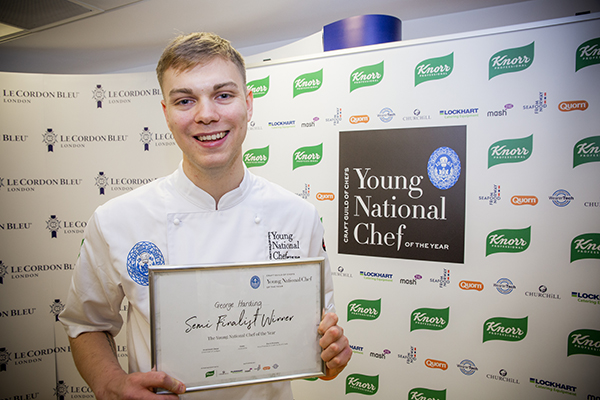 George Harding, recently appointed Senior Chef de Partie at The Atlantic Hotel and Ocean Restaurant, Jersey (www.theatlantichotel.com) has been named winner of the London semi-final of the Craft Guild of Chefs Young National Chef of the Year competition. George will now progress with the nine other finalists to the last round of the competition which will take place at The Restaurant Show, London on 1st October 2019.

The Young National Chef of the Year competition represents the most talented pool of young chefs in the UK. With a focus on core skills, chefs incorporate current trends and techniques into dishes to embellish and enhance them. Entrants are judged on a good understanding of basic skills, the foundation of cookery, simplicity, flavour and excellence in the execution of finished dishes.

At the end of the London round, Hrishikesh Desai, executive chef at The Gilpin Hotel and Lake House said: “I was honoured to be asked to take on this role and have thoroughly enjoyed judging these two young chef heats. Having previously competed in and won The National Chef of the Year, I understand how the chefs feel and I think they have done a fantastic job in new environments, working well under pressure.”

Patrick Burke, owner and managing director, The Atlantic Hotel said: “It is difficult to overstate George’s achievement in winning the London semi-final of the National Young Chef of the Year competition. He was up against some very talented young chefs from some of the top hotels in the country and I believe that his success speaks volumes for the quality of gastronomy on the island today. We are immensely proud of George and will be supporting him all the way to the final in October.”

For more information on The Atlantic Hotel, please visit www.theatlantichotel.com.