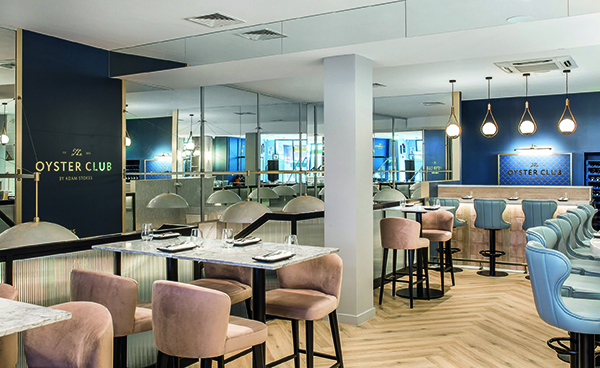 The Oyster Club by Adam Stokes is a causal and relaxed approach to dining. With an Oyster Bar, a menu focussing on Seafood and a stunning Wine List, guests can pop in for a few Oysters after work, or celebrate a special occasion in the restaurant.

Open from 12 noon the Oyster Club is located on Temple Street underneath The Ivy restaurant and is the second opening for Chef Adam Stokes.

Designed by Faber Design, there is a meet and greet area where diners are shown to a 24 seater bar, which leads down to the 30 cover restaurant area. As well as the bar where diners can eat, there is a separate oyster bar where guests can see the chef shucking oysters. The oysters are then served with a choice of condiment, including classic Tabasco and mignonette sauce.

Commenting on the work undertaken, Tony Matters from Faber Design told PREMIER HOSPITALITY: “This is a new concept for Adam. His previous restaurants were incarnations of his Michelin starred restaurant but this is a slightly new concept for him.

“The main thing we tried to do was reference the fact that it is a seafood restaurant but in a more abstract way. The biggest feature is the oyster bar, which runs the full length of the space where guests sit at high stools, eat oysters, drink champagne and watch chefs shucking oysters.  There are also lots of design cues inspired by the sea so subtle, little abstract touches throughout the space. The lights above the oyster bar were inspired by oyster pearls so they are almost like a pearl suspended in a hoop. There is also a large suspended light feature that is almost constructed like a yacht rigging with tension cables and the textures, finishes and colours are very soft with a palette of blues and light tones.”

Faber Design worked alongside main contractor AS Interiors to complete the project and since opening, feedback about the site has been extremely positive.

Taking its name from a group of intellectuals and scientist who used to meet in Edinburgh in the 1770s to debate and exchange ideas over dinner, The Oyster Club menu includes caviar farmed in Exmoor, fish pie with lobster and a sea bass sashimi. There are also six types of oyster on the menu including oysters from Loch Ryan, which is close to Glenapp Castle, Southwest Scotland, where Adam won his first Michelin star. There is also a dazzling array of alcohol on offer including wines, champagnes, beers and stouts.

Tony concluded: “This project is very important to us. We do want to build long term working relationships with our clients and Adam is a key client for us. He was one of my first clients when I started Faber Design and we have continued to work together. It has been great to see his success and it has been a privilege to play that small part in his success. We were over the moon to do this work and we hope it will be as successful as his other ventures.” 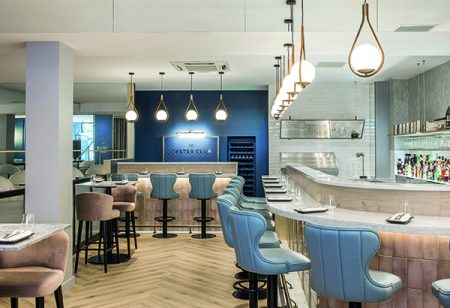