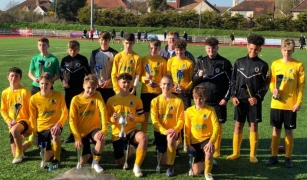 The Horsham branch of Covers Timber and Builders Merchants has renewed its sponsorship of a Horsham FC youth team for the 2019/2020 season.

The team, which is based at Gorings Mead and will shortly be moving into a new stadium, has been supported by Covers for the last five years as they have progressed through the age groups. This season the team will move up from the U14s to the U15s and will continue to display the builders merchants’ logo on its kit.

After only losing one match last season, the squad will be changing leagues in 2019/20.

Annie Raby, who is Horsham FC’s Youth Secretary, said: “We would like to thank Covers for its continued support. The side has had a bumper year under the guidance of their manager, Tony Massamo, and the squad is looking forward to the new season in their new ground, which we hope will be ready very soon.”

John Hamilton, Horsham Depot Manager at Covers, added: “It is an absolute privilege to support a youth side that has progressed so well over the time we have been supporting them. We are extremely proud of all the players at Horsham FC U15s and wish them the very best of luck for a successful 2019/2020 season.”