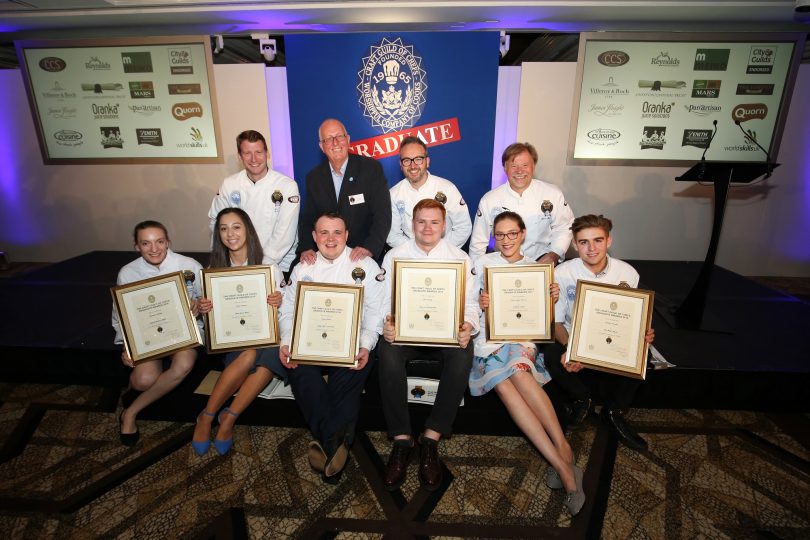 Fifteen young chefs have made it through to the final exam of the Craft Guild of Chefs’ Graduate Awards following intensive heats last week in Birmingham and London. Eleven chefs have made the kitchen final exam and four will complete the pastry, both of which will take place at Westminster Kingsway College on Thursday 29th August 2019.

In the kitchen exam, chefs will sit a paper test before going on to complete butchery and fishmongery tasks, showcase their own style of cooking with a mystery basket of ingredients and create a vegan dessert. Only chefs who achieve a pass mark of 85% or higher will enter the Graduate Awards Hall of Fame when the achievers are revealed on Friday 6th September 2019. For the chefs in the pastry exam there will be a series of challenges that must be completed within five hours. The Graduate Awards opens doors for young chefs, encouraging them to develop classic culinary skills whilst putting them firmly in the spotlight as ‘ones to watch’.

The eleven Kitchen Graduate finalists for 2019 are:

The four pastry chef finalists have been revealed as:

One of the highlights of making it to the final is the opportunity to join a two-day mentor experience on the 9th and 10th July. This includes a full day at Daylesford Organics where the chefs will tour the farm and all its surroundings, followed by a cheese demo from the award-winning cheesemakers. Chefs will enjoy a BBQ lunch and watch demos from the London Meat Company, James Knight of Mayfair and talented pastry chef Andrew Ditchfield from the House of Commons.

In the evening, the group will head to The Rabbit Pub in Kingham for dinner with an overnight stay at the Crown and Cushion Hotel. The second day of the trip will include a tour of Shipton Mill before heading to Upton Smokery to explore and relish a BBQ followed by an afternoon of gin tasting at Cotswolds Distillery.

Steve Munkley, founder and Vice-President of the Graduate Awards said: “So much work goes into planning the two-day mentor experience but it’s absolutely worth it as we aim to make being part of these awards as memorable and valuable as possible. Whether the chefs achieve the pass mark or not they will all take so much away from the heats, mentoring and final exam experience. Those who do pass, will go on to test their cooking against the UK’s best young chefs in the Young National Chef of the Year competition in 2020. Each year we look to develop and grow the Graduate Awards and our mentoring trip is an important part of our mission to improve culinary skills in the UK.”

The Highest Achiever of this year’s award will automatically be seeded into next year’s Young National Chef of the Year final with all Graduate Achievers being offered a place in the semi-finals.