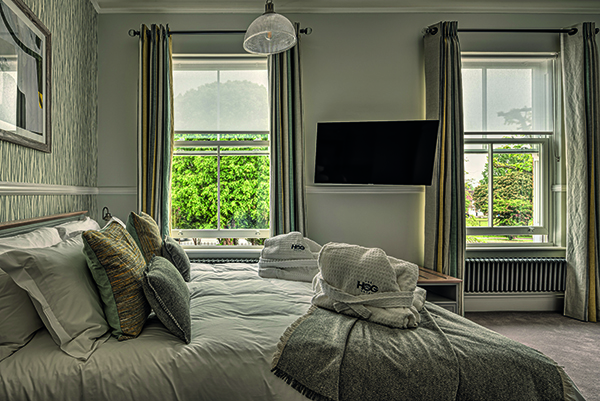 In Pakefield in the coastal town of Lowestoft, a 17-bedroom boutique hotel has changed hands and has rebranded. Recently opened, The Hog Hotel, previously known as Fishers hotel, was bought by Nathan Jones and his wife Sally in August 2018 for an asking price in excess of £675,000.

It was named after the hedgehog, the favourite animal of Jones’s late father. Talking about the rebrand, Nathan said:

“When my father, who lived in Lowestoft for the last 30 years, passed away 12 months ago, we wanted to remember him in a cheerful tongue-in-cheek way. Hedgehogs were very much his favourite animal.

“We had always planned to change the hotel name; this came up in a moment of madness and we all loved it. Hedgehogs are certainly associated with sleep, which works well for the hotel. They are also keen eaters; this synergy resonated with us, as our hotel will have a brand new restaurant and bar which we look forward to telling people more about in the coming months.”

To help redesign the hotel, Nathan and Sally worked with Hannah Cokeley of Shelf Interiors. Originally it was planned as just the restaurant but then the design developed organically, and the hotel was refurbished. Most hotels are designed brilliantly, but the Hog Hotel incorporates the brilliant, luxurious design with cosiness ensuring that guests will want to stay for longer and longer.

Premier Hospitality spoke to Hannah about the hotel’s design. She said:

“Nathan and Sally are a new client and I was introduced to them and this project through a mutual friend. I’ve recently set up on my own as a business, and so I suggested that I come up with a concept board for the hotel restaurant. That went really well, and it went from there.

“The Hog has been one of those projects where it starts off as; ‘we’re just going to do the restaurant’ so we developed the concept board for the restaurant. Then we thought we might as well do the bar and conservatory and after that we decided it would look so out of kilter with the rest of the  hotel that they wanted to redesign the whole thing. It grew massively, and Nathan and Sally aren’t ones to do anything by halves and when they realised what they’d taken on, it was time to close in order to do the full refurbishment.”

Hannah started working with them in late summer 2018 with the hotel was due to be open in February but that was pushed back until spring in order for the hotel to be designed as the best of the best.

“In all, there wasn’t a brief as such. The clients wanted a Scandi design, which could have been difficult with an already existing structure but with the restaurant they wanted it to be quite dramatic yet quite simple which is where the Scandi vibe came in.

“We looked at creating something almost monotone; black and white with a really rich petrol blue, in really thick, really luxurious velvet in the window. The artwork sort of did the talking for everything else.

“The restaurant has the most original, beautiful high ceilings so we wanted to keep them, and in turn keep the drama and let the architecture do the talking rather than distract from it too much, but instead enhance it.

“The bedrooms are very luxurious but very cosy. We’ve got really lush carpets, beautiful fabrics at the windows, and it’s just snug, and a contrast from downstairs. Downstairs is very much design led and upstairs is luxurious.”

Hannah finished with the impact the rebrand The Hog Hotel has had on her business, Shelf Interiors:

“For a small business a project like this is massive. There are endless opportunities for me personally, and when you’re six months in, in an infancy of a new business it’s incredible. I don’t think the hotel is stopping at one; there are talks and plans for it to become for it to become the first of several.

“I come from a specialist interior background, and when you get a brief that’s not limited by design, you design because there’s a reason behind that design. When you’re given a hotel with almost free reign you’re working with something with far more passion, and to be part of this is incredible and to have met Sally and Nathan, they’re very inspiring people. They are enablers and they can see there’s passion behind something so they get behind you and it’s really lovely. It doesn’t happen with a lot of clients. It was a good project to be part of.”

The Hog Hotel can be found on London Road, Pakefield, Lowestoft, Suffolk. 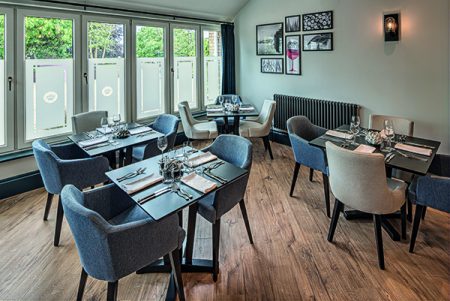 Founded by Ben Bobby in 2011 and bases in Eye, Suffolk, Eye Flooring specialises in all aspects of flooring including both domestic and contract flooring.

Ben has over 16 years’ experience in flooring and recently qualified to become a Master Installer of luxury vinyl tiles, making him one of only a few in the country to have this qualification.

Eye Flooring was recently involved in all the flooring for the refurbishment of The Hog Hotel. This included measuring and recommending the most suitable flooring for each area and coming up with a design had both a ‘wow’ factor but was also up to the job of withstanding the usage of a fully working hotel.

The company regularly completes domestic and contract work around the UK and abroad. From fitting out flooring in a luxury flat to contributing to the restoration of a local town hall, Eye Flooring takes pride in all of its work.

“This project has been exciting for us to be involved in as it is a complete transformation done to such a high standard.

“We pride ourselves in being able to offer the highest standard of fitting without a huge price tag. We are a family run business with honest values and good customer relations.” 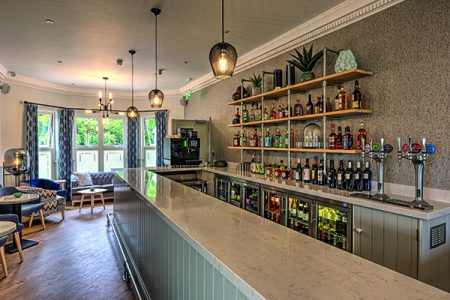 D.C.H Builders Ltd is a construction company, specialising in refurbishments and new builds. The company has been established for 30 years and has an enviable reputation for high-quality workmanship. D.C.H Builders Ltd was the main contractor for The Hog Hotel, undertaking all the required major renovations.

“Our involvement with Nathan Jones, the owner, arose when we undertook some work on his private house. The Hog Hotel was a venture that he was planning, and we were offered the opportunity to carry out the extensive building and refurbishment work on this new project. Our aim is to provide an excellent standard of work at a fair price and most importantly to ensure that the customer is completely satisfied.”