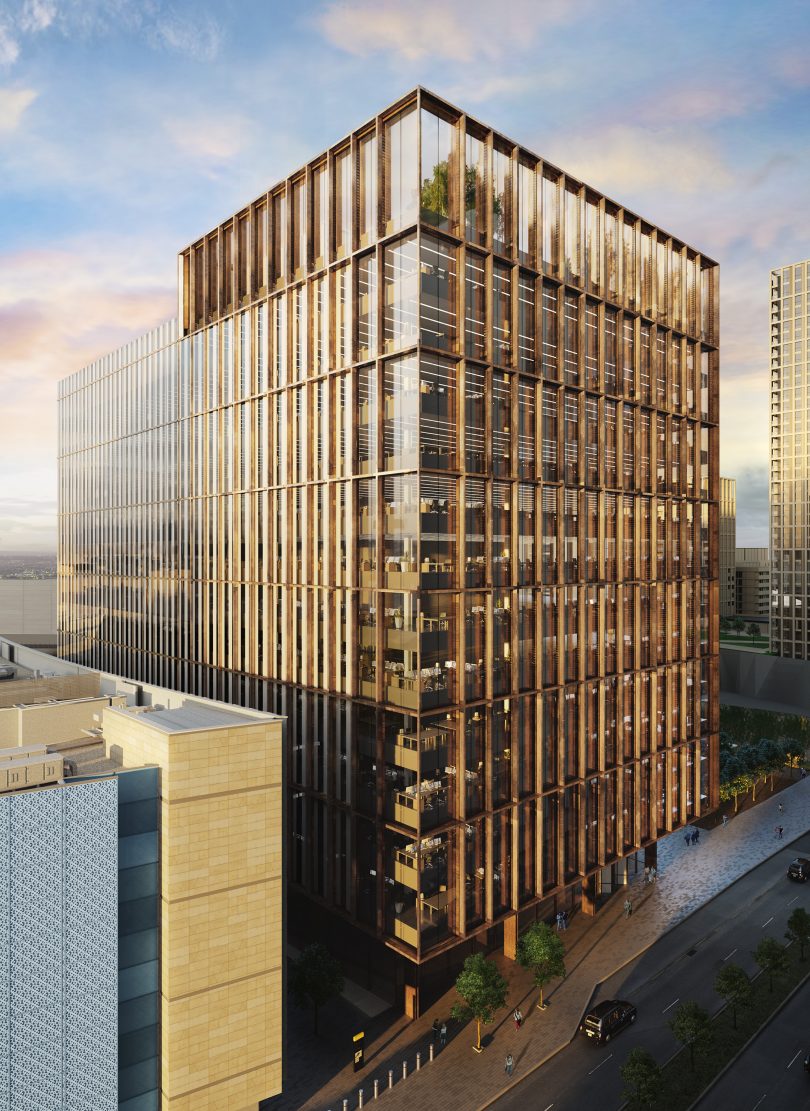 Unibail-Rodamco-Westfield, Legal & General and Her Majesty’s Revenue and Customs (HMRC) today celebrated topping out at the 12-storey office, where HMRC will establish a new Regional Centre. HMRC has leased a further 58,000 sq. ft. to become the sole tenant of the 300,000 sq. ft. development next to Westfield Stratford City.

The topping-out ceremony was attended by senior executives from Unibail-Rodamco-Westfield, HMRC and Legal & General, which has forward funded the development. Topping out of the new offices follows erection of approximately 4,000 tonnes of steel, seamlessly above an operational shopping centre – Westfield Stratford City. Works continue with completion of the facade and internal works, in preparation for handover of office floors for final fit out by HMRC.

Work on the new regional hub commenced in November 2017 and today’s announcement sees that deal extended to cover the entire building, which has been developed, constructed and leased by Unibail-Rodamco-Westfield. The development will accommodate approximately 4,400 HMRC employees from late 2020.

The project is another example of Unibail-Rodamco-Westfield’s strategy to increase the densification of its exceptional and highly connected retail destinations. In Stratford, the Group has delivered Europe’s number one shopping centre by footfall (Westfield Stratford City) which now welcomes over 51 million customer visits every year, and has made significant investments in infrastructure, offices, hotels and, most recently, in residential.

Keith Whitmore, Head of Development, Design and Construction, UK/Italy, Unibail-Rodamco-Westfield, said: “Our office development at 14 Westfield Avenue demonstrates our continued commitment to creating and strengthening communities through the mixed-use nature of our sites where we are creating city districts. We’re delighted to announce that HMRC has leased the entire building here in Stratford, an area that is experiencing significant inward investment with new homes, offices, hotels and a new cultural and education hub, East Bank, alongside Europe’s most popular shopping destination, Westfield Stratford City.”

Derek Gilby, Senior Fund Manager, LGIM Real Assets, said: “When we funded this deal we were confident that it would have a meaningful impact on this area, creating new jobs and driving economic growth. Stratford has excellent fundamentals with first class transport links and this investment will complement our existing ownership of the nearby TfL building as well as the further regeneration in the area.”
HMRC’s move is part of the wider Government Hubs Programme, which is transforming how the Government uses property. HMRC is leading on delivering Phase One of the Government Hubs Programme and is investing in the best technology and basing its people in improved offices as it creates better, more modern customer services. The new office building represented L&G’s seventh Government Hub forward funding deal.

Sara O’Byrne, HMRC Regional Implementation Lead for Stratford said: “I’m pleased to be celebrating the build reaching this significant milestone. We can really start to picture and look forward to the modern workspaces and facilities which will enable our colleagues to work in the way that suits the type of work they are doing. Once completed there will be a range of staff from across London and the South East based in this state-of-the-art building delivering vital services for the public. We are now keen to reach the next milestone, when HMRC assume responsibility for the building and the internal fit out starts, bringing us a step closer to achieving our transformation.”