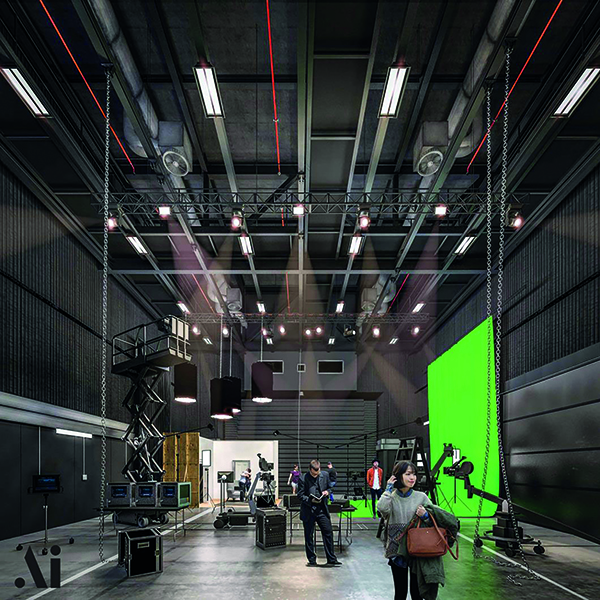 LocatED, on behalf of the Department for Education (DfE), is overseeing the redevelopment. LocatED is a government-owned property company, responsible for buying and developing sites for new schools in England. The main contractor for the project is Wilmott Dixon Interiors.

The new free school is for 16–19 year olds and will teach the skills and background knowledge needed to join the screen industries (which include film and television), to progress to higher education or to enter other professions, alongside a broader curriculum.

Originally built as a factory in the 1920s, the building had been vacant for a number of years before it was acquired by the ESFA.

The new school design will retain the existing 1920s building exterior whilst internally it is undergoing significant re-configuration, with the centre of the industrial space demolished and being replaced with a three-storey film production studio and supporting facilities.

William Mumford, Associate Director – Development at LocatED said: “The works included carving out a new three storey studio space in the centre of the building. A new light well has also been created around this, bringing in more natural light.

“Because of the fairly specialist nature of the academy, we have also created a number of other technical areas such as a sound mixing room, film editing suites, a large main stage and a number of smaller stages for set design.”

So far, significant demolition has taken place and the three-storey steel framed central core area has been created. Other completed works include the demolition and re-building of the undercroft which runs along the full frontage of the building.

Final M&E fit out is now underway, together with the installation of specialist AV infrastructure to support connectivity between the various stages and specialised areas of the school. A first floor level open air cinema space is also being completed, which will allow for film viewings and showcasing student work in the evenings.

William Mumford said: “Challenges of the project include the very sensitive nature of the building’s location opposite Highbury Grove. It is a very distinctive and substantial building with a light industrial feel and it was important to retain this look, preserving the heritage of the building within a modern context. For example, all of the original fenestration had to be replaced with Crittall style windows of a similar appearance.

“Another key challenge was the demolition contract – including demolishing the interior third of the building which required significant propping – as well as the reconstruction and temporary propping of the under-croft to maintain the structural integrity of the building. Integrating the audio-visual requirements of the academy within an educational space also required significant work.

“I think the completed building will look sensational and provide a fantastic learning space for future students.”

The project started last summer and is due to complete in September 2019.