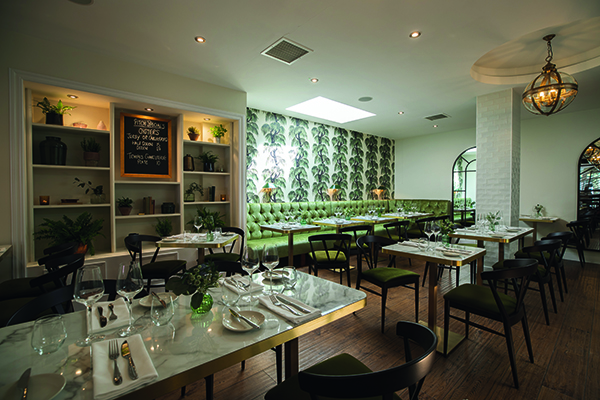 2018 winner of MasterChef, Kenny Tutt, has recently opened a restaurant in his home town of Worthing. Alongside the restaurant, in which the dining area spans two floors, Kenny has also set up a cookery school.

Esmé Callaghan is a freelance designer with a background in set design and graphics design. She worked with Kenny to design the interior and branding for Pitch. She told PREMIER HOSPITALITY:

“Kenny approached me after seeing my illustrative menus I designed for Good Taste award winners, Be Chocolat. Before Pitch, my first project with Kenny included designing illustrative menus and logos for a Christmas pop up event at Cissbury.

When Kenny contacted me for the Pitch project, he offered me the role of the Creative Director. My initial responsibilities were to create conceptual interior designs, research themes and narratives for the brand and create mood boards. The role then grew to designing the full interior and exterior of the building, as well as designing the menus and creating illustrations you can find on Pitch’s branding.”

Pitch is four floors and the two started discussions about the restaurant’s design in December 2018, with the physical work starting in the winter of this year, finishing in time for its May opening. The brief was minimal; to give the space an English market feel, entwined with English heritage and to give it a humble opulence throughout.

“To provide some context; Kenny had read an article discussing the successful Worthing greenhouse industry from the late 1800s to the early 1900s. Kenny himself had grown up on markets stalls, selling with his parents. Kenny acknowledges that his experiences on the market stalls has heavily influenced his cooking, and he likes to use fresh and local produce. Discovering this link between Worthing’s heritage and Kenny’s personal connection with markets, the article became our starting point for creating visual and branding themes for the restaurant.”

“To incorporate the narrative of a Victorian market theme into the interior, I designed the front part of the restaurant as an outdoor market look, complete with outdoor paving stone flooring and a dumb waiter shop front. In contrast, I designed the dining area to reflect the customers of the Victorian era, who were often wealthy enough to afford Worthing’s fresh produce, such as King Edward VII, who enjoyed Worthing strawberries. I created a humble opulent look with botanical wallpaper, moss velvet seating, and gold dome lighting.”

Esme said that she and Kenny also wanted Pitch to have a contemporary feel, so they used a palette of earth tones, which included indoor greenery, and used metallics in the design such as gold accents, to ensure that the space still felt modern, whilst also reflecting a heritage style.

On the second floor the lounge feel of the restaurant is more exaggerated, with a marble fireplace creating a cosy atmosphere. There is also a space where guests can hire out the private dining area for parties.

The third floor is the kitchen, making the fourth floor the cookery school. The cookery school will have a rustic, vintage feel, with wooden beamed ceiling, wooden and marble top work surfaces and styled with brushed gold finishes, greenery and herbs. Colliers Kitchen in Worthing have been heavily involved in designing this space and are currently installing their interior. This space will be opening later this summer.

Esme finished by telling us about her time spent designing the project:

“It’s been an incredible experience to work on such a wonderful project. Working with Kenny and Lucy Tutt has been truly collaborative, which has given me the freedom to explore my designs and has been very creatively fulfilling. I’m looking forward to seeing the restaurant brought to life and enjoyed by its guests.” 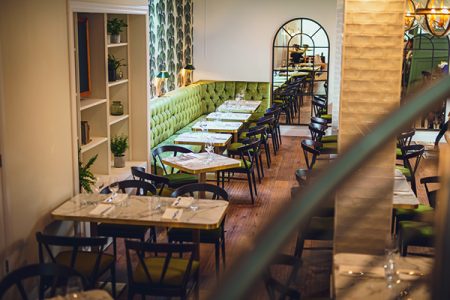