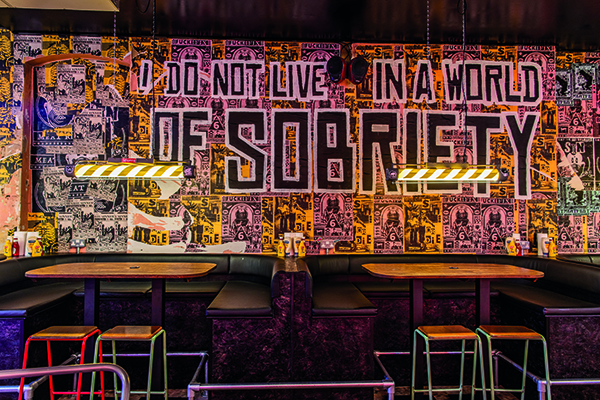 MEATliquor has tuned it back up to 11 with a new flagship diner and late night bar in London’s West End- W1MK.

The closest bar to Oxford Circus, this is the eleventh MEATliquor bar and diner to open since the original W1 MEATliquor. Firmly established as royalty in Britain since their humble burger van beginnings a decade ago, MEATliquor’s newest venue is smack bang in the heart of central London.

The flagship site, just four minute walk from the original MEATliquor W1, opens with a whole host of exciting interior features, from ‘Poke for Jäger’ buttons on every table, an eight-foot illuminated giant pickle, neon signs designed by Gods Own Junkyard and a Photaloo, (a Portaloo turned photo booth), complementing the iconic MEATliquor graffiti created by I love Dust and an aesthetic known throughout its locations.

Music and rock & roll are in MEATliquor’s DNA, and the new late night bar and diner restaurant is the same: with the Secret Jukebox iPad app allowing customers to control the tunes from their table and a brand new space for live music and DJs, alongside a 3am late license, making it the best place to go for pre or post-gig food and drinks.

MEATliquor cooks up some of the best burgers in London, with signature staples such as The Dead Hippie and The Green Chilli Cheeseburger available in the new location, plus heaps of vegetarian and vegan options including a brand new vegan Triple Chili Challenge, giving willing participants the opportunity to get their food for free if they can eat a Burgaloo, Vegan Dog with Black Bean Chilli, and Black Bean Chili Fires in under ten minutes, proving that there really is something for everyone.

You don’t just have to eat to enjoy the new location; with a new bar area serving an impressive selection of cocktails including The Radlerita, Hard Shandy and Cider Car (all served available in either 0.5, 1, 2 or 3 litre sizes) plus takes on classics like The Full English Martini, New Cross Negroni and MEATjito are all on offer, along with other house staples, craft beers, wines and spirits.

“We’re delighted to have opened our brand new site, slap-bang in the centre of London. We closed our previous W1 site in February have been searching for the perfect spot since November last year. Over the past ten years we’ve built the business from a van in South London to 11 restaurants and we’re proud to build on the last decade with this incredible location.

“The newest venture has real character and a 3am license meaning we can get the party started and then keep it going into the early hours. There’s even a MEATeasy entrance at the back which takes you straight into the bar area late at night so people can just pop in for a drink if they want.

“For the first time ever in any of our places, we’ve built a stage which we are going to be programming over the coming months with some great live acts and DJs. Watch this space for details.”

To find out more, visit: https://meatliquor.com/ 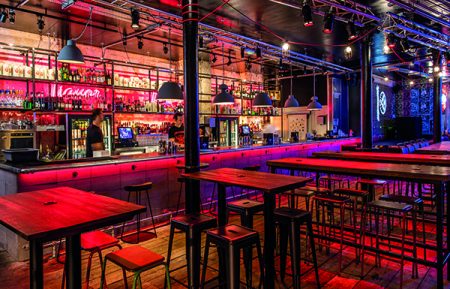 Meridian Design and Build Limited specialises in restaurant, retail fit-outs and high residential. The company is a family run business and has been in operation for over 20 years.

Meridian Design and Build were recently appointed as the Main Contractor for the new MEATLiquor W1, their previous site was situated on Welbeck St and was closed back in February 2019.

“To build MEATLiquors latest restaurant was quite an honour, as soon as we met with SHED the designers and Scott the founder we knew that this was going to be a very interesting and unique project to work on, there was a lot to live up to with their previous site closing, and I feel we did (as they called it) The O.G justice.”

“As a company we pride ourselves on being on time and having an immaculate finish. We also try to become as involved in the project as possible, from supplying samples to providing costing at short notice. We try to go above and beyond to me to brief and the Client’s expectations.”