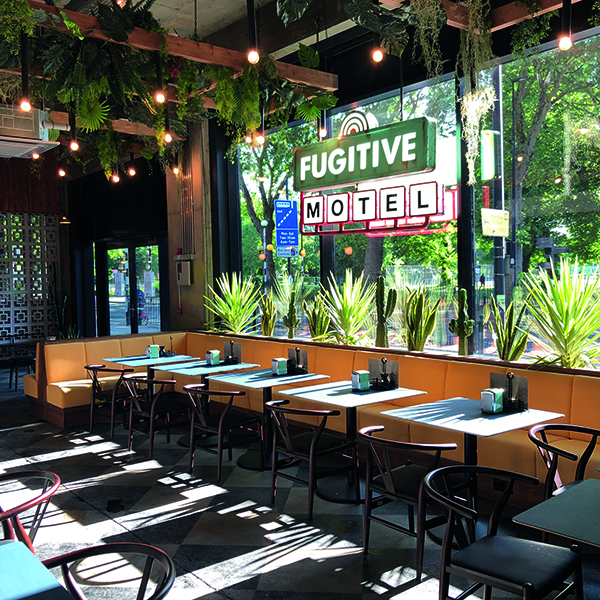 The venue is a playful oasis filled with fresh greenery in which Londoners can take refuge from the busy city.

The unit runs alongside a row of currently unoccupied rail arches which are set to be redeveloped this summer, akin to neighbouring Paradise Row a few years back; bringing new life to Bethnal Green Gardens and providing a new food, drink and cultural hub for the East London community, and visitors alike.

Taking its design influence from West Coast American motels commonplace through the 50s-60s, the 140-cover inside space at Fugitive Motel is decked out in mid-century pastel colours, with a terrazzo bar counter and an abundance of plants and greenery.

The greenery seeps outdoors into the summer terrace that runs along Cambridge Heath Road, with seating for over 25.

Sharing booths accommodating up to six people run along the floor to ceiling windows, each with their own motel-style ‘vacancy’ light which can be turned on or off depending on whether guests would like others to join them in their booth; perfect for those wishing to ’co-booth’ throughout the day, or for sociable groups in the evening.

A shuffleboard tucked around the corner of the bar adds to the playful nature of Fugitive Motel.

Speaking of the design brief for the scheme, Patrick Clarkson said: “I know that David and Liam love America and have spent time travelling up the West Coast – and I have spent a lot of time in California and New Mexico too.

“So, based on the name of the venue, I was inspired to think of the theme of 1950s Americana and a slightly dilapidated ’lost motel’ that someone might have stumbled across.

“David and Liam liked the idea of a post-Apocalyptic look – and this tied in very well with my retro theme.”

The design seeks to detract from the venue’s location within a large industrial space by giving every area of the interior character and the feeling of being in ‘a world apart’ with lots of interactive areas creating a ‘journey’ through the venue with intriguing detail around each corner.

Design challenges of the project included creating enough space to seat 140 people, whilst also providing enough room for the various utilities needed, as well as for the staff to work.

The all-day café with co-working space then rolls into the evening with drinks at the bar, including a selection of low and no alcohol craft beers and kombucha on tap, and speciality sourdough pizza on the menu from noon until late.

After years of travelling to beer meccas the world over, David and Liam are localising their knowledge and passion for high quality drinks at Fugitive Motel, with a menu that showcases 14 craft beer lines on draft from a range of local East London breweries and those specially selected from their travels, as well as low and no alcohol (ABV) beer options.

Setting itself aside from other London craft bars, this will be the first time that low, no and full ABV beers are permanently highlighted on draft alongside one another, and beers are positioned along the line from no ABV upwards being easy to choose.

A concise collection of refined and natural wines and a Spritz and Kickz menu, including Aperol Spritz, Martini Prosecco and others to round off the drinks list.

Patrick Clarkson concluded: “This was a very important project for me – particularly as I personally found the idea of finding a place to socialise and enjoy non-alcoholic drink very appealing. So this project was very close to home – particularly as it based on a design and style which I love. We are very happy with the project, which we think has been well executed.” 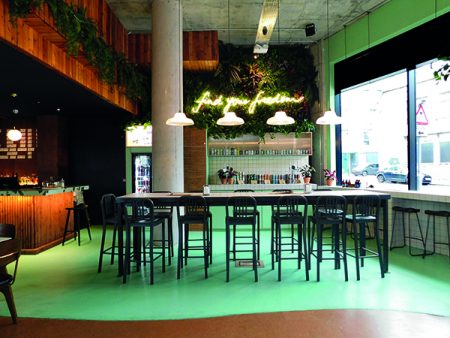