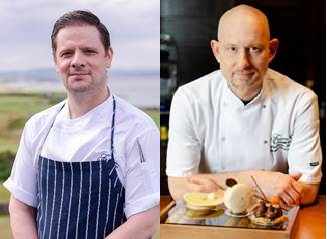 Fairmont St Andrews is delighted to announce two new internal senior promotions within the culinary team. Chris Niven has been appointed Executive Chef, leading the day-to-day operations across all kitchen outlets at the five-star golf and spa resort. Previously Executive Head Pastry Chef, Alexander Häebe, has been appointed to the position of Culinary Director. The two new promotions are part of the Scottish properties continuing investment in F&B.

Having joined the team in late 2018 Chris’s personal food philosophy of utilising local ingredients and suppliers to create simple dishes with refined tastes, techniques and textures is extremely prevalent. Chris began his career in 2011 at the Old Course Hotel practicing and refining his skills, and in late 2017 while serving as Head Chef of the Principal Hotel Edinburgh, Chris competed on MasterChef: The Professionals making it to the final 12 in knockout week.

The role will also work seamlessly with Alexander’s new position, which will see him manage the day to day operation of the pastry department whilst also having responsibility for the culinary direction, concepts and marketing plans for all F&B outlets.

John Keating, General Manager of Fairmont St Andrews commented: “These are worthy promotions within the culinary team, and we have very exciting plans and high ambitions for the different outlets at the property. With such a diverse offering and are excited to reveal more in the coming months.”