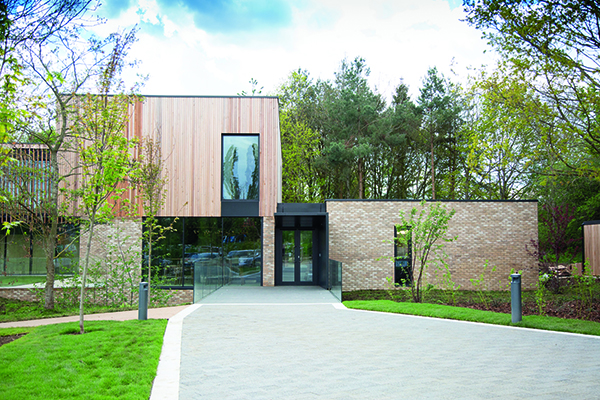 Architects Design Engine and construction firm Stepnell have delivered a spectacular £6.75 million hotel for one of the country’s most picturesque golf courses.

The boutique hotel at Feldon Valley golf club in the Cotswolds has been constructed alongside the addition of four woodland lodges and an extension and remodelling of the existing clubhouse.

Speaking to PREMIER HOSPITALITY MAGAZINE, Richard Rose-Casemore, Project Director for Design Engine said: “We were originally commissioned by the owner to carry out a new masterplan for the site. Our proposals included a new green-keeping complex, boutique hotel, woodland lodges, an extended and transformed clubhouse and the re-alignment and change of emphasis of the car park from a sea of tarmac to soft parking courts.  The scheme brought a new cohesion to the site and was given planning permission by Stratford-on-Avon District Council in 2016. With this consent, the owner decided to proceed with the whole complex and we worked with our fellow consultants on tender information, which resulted in Stepnell’s appointment as main contractor in 2017.

“The setting of the project in the Cotswolds Area of Outstanding Beauty is phenomenal – the views over the golf course and of the Cotswold Hills really make the site a stunning country retreat. I have always firmly believed that the star of the show should remain the setting so we have tried to design an architecture that doesn’t shout, but instead is designed to weather gracefully and blend in with the surroundings over time.”

Richard continued: “The original two-storey clubhouse was extended, gutted and totally remodelled inside. Now, you can enter from the higher level at the car park and leave via the lower level onto the golf course. The lower level has been given over to the members in its entirety with changing facilities, administration, a fitness suite and a pro shop. On the upper level is the new fine dining kitchen, restaurant and bar with external terraces and balconies, providing new inside-out space with views over the golf course.”

Providing accommodation for up to 50 guests, the new hotel and lodges complete the transformation of Feldon Valley.

Richard added: “On the ground floor of the hotel is the reception and administration area, reception lounge which opens onto a garden, and five en-suite rooms; on the upper floor are the remaining eight rooms. All of the rooms are slightly different with the idea being that every time you come, you get to experience a different room, with a different view, orientation and interior design.

“Each lodge has three bedrooms and a kitchen/living area and is designed flexibly so that it can be booked as a whole for a group or family, as a suite, or as an individual room

“The lodges are all designed around the root protection areas of the existing copse of deciduous trees. Each lodge is also angled so you don’t overlook your neighbour and each room has a generous balcony.”

The hotel and woodland lodges are linked by an elevated boardwalk, with the buildings clad in high-quality, naturally weathering materials that ensure the development is fully in keeping with the idyllic countryside setting.

Richard said: “Our Client had a clear vision for the site, which we collectively termed ‘Contemporary Cotswolds’. We have tried to be faithful to the interpretation of that theme in the architecture, interiors and even in the details such as wayfinding and signage.”

The entire project was delivered while the club remained open to members, ensuring it maintained its existing revenue streams while the build was in progress.  360 Golf, the operators of the Golf Club worked closely with Stepnell to ensure disruption to members was minimised.

Rob Speirs, Regional Director at Stepnell, said the finished project will bring an added dimension to the club’s offering.

“One of the key parts of our brief was to deliver something that enhances the club and surrounding area for non-members, and we’re happy to have stepped up to meet the challenge,” he said.

“The work at Feldon Valley was essentially three projects in one. As well as an extensive refurbishment job on the existing clubhouse, the need to build both a two-storey hotel and four high-quality woodland lodges – all while allowing the club to stay open for business – gave us the opportunity to demonstrate the variety of our expertise.

“It is a testament to our teams on-site that the project was delivered to an incredibly high standard while ensuring minimal disruption for the club’s regular users.”