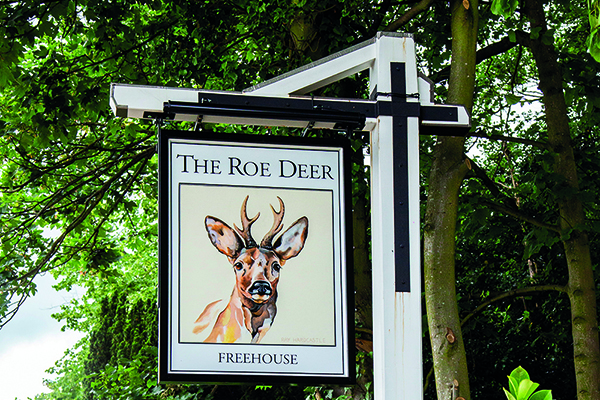 Brunning and Price is turning Lawnswood House into The Roe Deer pub. Situated off the A449 Kidderminster to Wolverhampton Road, it was last renovated in 1924. The property, built during the reign of King George III in the Regency style between 1813 and 1816 for the family of iron manufacturer Edward Foley, has belonged to the Marsh family (of famed sausage makers Marsh & Baxter) for the last 50 years. Following the death of John Marsh in 2014, it was taken on by pub and restaurant owners Brunning and Price.

The building has high ceilings and huge casement windows that ensure rooms are flooded with natural light from the ancient gardens surrounding the property. The building itself lends itself perfectly as a pub and now has a large bar in the heart of the space. Outside is a stone terrace to the front, which enjoys tremendous views of the grand old trees and the lawn and the fields beyond it. There is a private dining room upstairs that also enjoys the same views and will seat up to 14.

Opening this summer, Brunning and Price said the restored venue will be traditional in style, with open fires, wooden floors, bookcases, decent old furniture and lots of rugs and plants, offering up good cask beers, freshly cooked food, decent and affordable wine and a good shelf of malt whiskies and gins.

“The restoration on the building is almost complete. The old swimming pool has made way for the car park, a new extension has been added to the side of the building to create a beautiful garden room and the entrance to the building has been recreated in the style that once stood when the building was created by the Foley family. We now even have a bar in place! So, now our attention is turning to looking for local breweries to help us stock it and creating a great team of people to work behind it.”

Jon is joined by Hannah from the Fox in Newport who will take up the position of Junior Deputy Manager and locals Simon who will become Deputy Manager, Connor and Matthew who will be Assistant Managers.

Luke Wilcox moves from the Red Lion to take up the position of Head Chef. Along with his team he created a menu which will be something of an eclectic mix striking a balance of hearty pub classics, complemented by more exotic influences from around the world. It will change regularly to reflect the seasons but there will always be a mix of traditional fresh British dishes alongside something a little different.

It is extensive and offers mains such as rump of lamb, pan fried sea bass fillets, slow cooked Indonesian beef rending, beetroot and quinoa burger. Starters are just as satisfying, with poached salmon and fennel and grapefruit salad, halloumi chips, and steamed prawn dim sum to name a few. Hot drinks, cheese selections and spritzers are also on offer as well as many classic hearty puddings to choose from.

To find out more about Roe Deer, visit: https://www.brunningandprice.co.uk/roedeer/homepage/ 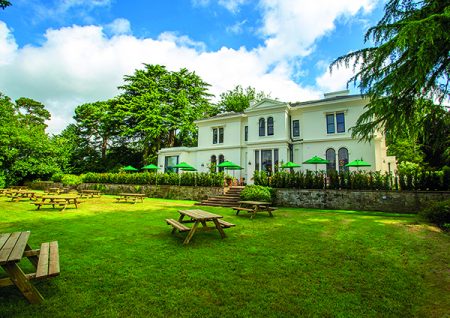 ABOUT BRUNNING AND PRICE

A group of 71 pub restaurants started in the North West of England and North Wales, but now with a substantial branch of the family in the South.

Each pub has its own style and flavour, run very much by the local team who choose good cask beers, freshly cooked food, decent and affordable wine and a good shelf of spirits. They run informal places for people who like to meet, eat, drink and talk in a relaxed friendly atmosphere.

An interview with the designers

How did you get involved?

“We are the incumbent designers for Brunning and Price with a dedicated specialist team of architectural and interior designers and technicians; we went along to Lawnswood house with the client to see if it was suitable to be converted into a country pub. Lawnswood House as it was then, is a very well-known property within the area, and upon initial inspection, it was a lovely building, with heaps of character, but we knew straight away that we’d have to do some serious work to the property to extend it and make it flow better in order to make it work. The big thing was that this is a departure from what Brunning and Price usually does, it’s not the usual cosy country pub model they are renowned for, rather it’s a much grander country pile. There was a little uncertainty at the start to see if this would sit well within their estate but once we’d created the design to show that we could make it work everyone was very excited about the opportunity, it still felt like it was a beautiful house but also a pub and dining experience at the same time.

Was the design traditional?

“Whereas there would normally be a relatively standardised brief for Brunning and Price’s country pubs, in keeping with their brand, this was different. This was one of the rare occasions they said to me ‘okay you can go away and design what you think is right for the building.’ That meant the building heavily influenced what the design was to be, we had to be honest to the building and at that point we realised it was as much about a restoration project as it was conversion. We then had to look into the history of the property and the various finishes and strength of colours that would do justice to the space. It was a real joy to work on, for the whole of the team.”

Are there any highlights of the design that standout now?

“That’s an interesting one, it’s hard to pick something in particular with such an abundance of detailing, but I would have to say new the garden room extension; it is really interesting how people have assumed it is part of the original fabric of the building, it’s been designed in such a way that it flows beautifully through the ground floor so people think it’s always been there. And that’s one thing we were really precious to do; everything that we added to the space felt like part of the journey and part of the design rather than something that was at odds to the original building. That was the most pleasing part of the design. Also, generally speaking the design makes the Roe Deer feel like that’s what it’s always been. It doesn’t feel like we’ve gone in and ripped the heart out of the building in order to force it into a country pub, it feels like it’s been around for years, which is a true test for a design team. The client and guests are very pleased with the results it and in terms of the locals it’s given them the opportunity to visit a historic building whereas before it’d just be a house on hill and they’ve never been able to see what it’s like inside so now they’re flocking from miles around just to experience it.”

Where there any challenges?

“There were some humongous challenges. It really pushed the team to its limits; it’s one of the most challenging projects we’ve had in years. The problem is when you’re converting old buildings that were a family home, they were never intended for modern day usage, so the infrastructure that was required in the project just wasn’t there. The utilities upgrades alone were arguably the most challenging part of the project, making the building fit for purpose before we even got to do all the fun stuff and design the interior. Things like the drainage for instance, we’ve had to do two miles of tunnelling through fields and farmlands back to pumping stations, and all this massive infrastructure work we’ve had to include in order to make it viable for so many people to come and enjoy. So that was a bigger project than the actual pub itself.”

What was the timescale of the project?

“From going to visit it last February the whole design team have been working on it constantly from then, so it’s been an 18 month project behind the scenes with an intense 6 months on site construction element, we’re still working on it now, fine tuning bits as it evolves. It’s been a big project, one of the biggest we’ve ever worked on.”

How important was it to be a part of this project?

“The team is immensely proud. It’s a flagship project for the client, and for them to say that this is the best project that they’ve ever had is so flattering for us. Brunning and Price have given us fantastic support with the upmost confidence we could deliver this for them, being the lead project consultant, it’s been an amazing project.” 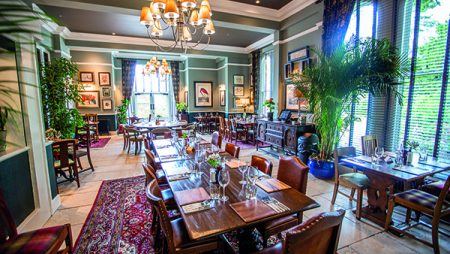