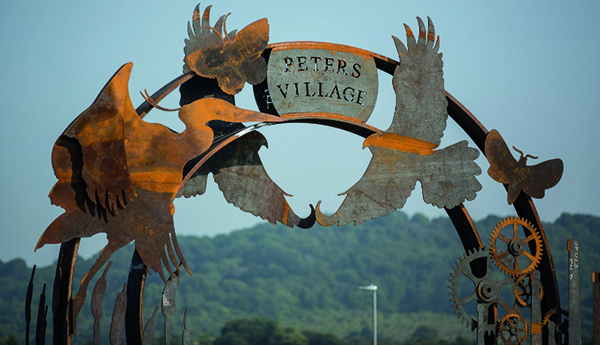 Peters Village – A New Community Enjoying The Past

A smart 1,000-home riverside community arising from industrial wasteland in Kent’s Medway Valley, has endorsed Government policy to speed re-development of Britain’s brownfield sites.
The location’s resurgence as Peters Village was masterminded by Trenport Investments Ltd, which bought the derelict site in 2001 and expects all homes to be completed by the early 2020s.

Responding to Government calls for new homes in the South East, Trenport proposed a large development with new roads, shops, amenities and open spaces, dovetailing with neighbouring villages on both banks of the River Medway, and insisted from day one that it would not be a ‘new estate’ but a new community.
Tonbridge & Malling Borough Council (TMBC) approved the scheme, only for it to be mothballed due to the 2007 recession.
Work on the £70 million infrastructure then started in May 2014 with an all-new road bridge as the key element, to link Peters Village and its Medway east bank neighbours with the west bank settlements of Halling and Snodland and, crucially, enable new links to the M20, M2 and M25 motorways plus high-speed train commuting into London.
“What became Peters Bridge looked like an expensive addition to the plan, enabled by a multi-million pound Government loan,” said Trenport Director Chris Hall. “But it liberated Peters Village and its established neighbours – Wouldham, Burham and Eccles – slashing what was a bank-to-bank journey of 25 minutes to less than a minute.
“A once isolated area amidst a busy part of the South East, was then suddenly plugged in, with far easier access to jobs, education, shopping, recreation and London.”

Named after the Peters family that once built and operated a giant lime and cement works on this stretch of the River Medway, the modern-day location contrasts sharply with its past. Where smoke once belched from lime kilns, and quarries scarred chalk downs during the Victorian era, some 200 new quality homes have now been occupied and residents can enjoy a landscape known for diverse and often rare wildlife.

These treasures include butterflies and moths, orchids, bats, dormice, abundant bird life and the highly protected Great Crested Newt; Trenport funded innovative ‘newt fences’ to prevent these amphibians from wandering into areas at risk from traffic or construction.

Additionally, the developer also pays for the management of a SSSI (Site of Special Scientific Interest) nature reserve. The rural idyll is enhanced by a comprehensive sustainable travel plan, with a footpaths and cycleways network.

“Occupation by many cultures over time underlines how important the River Medway would have been for moving people and goods around,” explained Chris Clarke, archaeological consultant leading the project.
“Even the Romans – famed for their roads – couldn’t ignore how a decent sized boat might carry 20-30 times that of a contemporary cart, while needing little manpower to move it.”

The Romans were also not alone in seeing the rich riverside farming potential and a considerable manorial estate had grown up by the 17th century, with Wouldham Hall the centrepiece. This building – demolished in 1960 – was supposedly the retreat for Lord Nelson and his mistress, Lady Emma Hamilton, while the naval hero was based at Chatham Dockyard, at the nearby mouth of the Medway.

The location’s population and chalk quarrying for lime and cement production then boomed alongside London’s rapid growth in Victorian times, though Peters works’ peak workforce of 1,000 and huge 80-strong Thames Barge fleet also allowed it to export to the world until its lack of a rail link caused closure in 1925/26.

The site then became the careworn home to various and often short-lived light industries: “Even amongst brownfield sites, there will be easier candidates than Peters Village,” Trenport’s Chris Hall admitted.
“But it has been a satisfaction to transform this unloved and disconnected part of Kent, making use of the quarry site to create different elevations across the whole location.

“We also felt that it should be a new community itself, rather than graft it to one of the neighbouring communities born out of the old cement works, so it needed its own village centre with shops and amenities.
“We also wanted to set the bar high on architectural quality while making the most of this rare riverside location, so we submitted our own planning applications for the initial housing phases, including a good mix of stock from apartments up to large family homes, so that these would become the blueprint for the whole community.

“The broad tree-lined riverside walk, with its smart balustrading and bespoke lighting further set the tone – a showpiece for the entire location.

“The industrial heritage was marketed as an asset too: rather than hide it, visitors are welcomed by a dramatic public sculpture on the roundabout serving Peters Bridge and the village itself. The design features cement industry motifs as well as the wildlife that survived and now thrives.

“In addition, village road names largely employ cement industry terminology and names from the works’ once famous barge fleet. The site’s diverse history is further highlighted by heritage trail boards, which we commissioned from a designer descended from the Peters family that ran the cement works – although he was unaware of the connection until recently.”

But Trenport has also been careful to connect Peters Village with its neighbours through community public relations and notably an annual art competition between the primary schools of nearby Wouldham, Burham and Eccles, offering cash prizes worth up to £3,500.

Trenport’s Chris Hall said: “The schools were worried about a possible extra burden on their essential curriculum, but we deployed expert mentors and the reaction has been overwhelmingly positive.”

Eccles’s school head Jonathan Bassett agreed when his school swept the board in the 2017 contest: “This annual competition has changed how we look at art in our school. We have had to raise our game – today’s result speaks for itself.”

One of the school’s has also since moved to Peters Village: plans for the new community included a primary school and governors at the ageing Wouldham All Saints CofE Primary School nearby realised it made sense to amalgamate the two into an expanded state-of-the art building (£7.95m) placed handily for access from both Wouldham and Peters Village.

“In liaison with the local education authority, we were only too pleased to help, in the interests of building the wider community,” said Chris Hall. 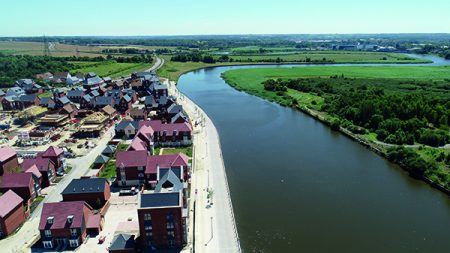