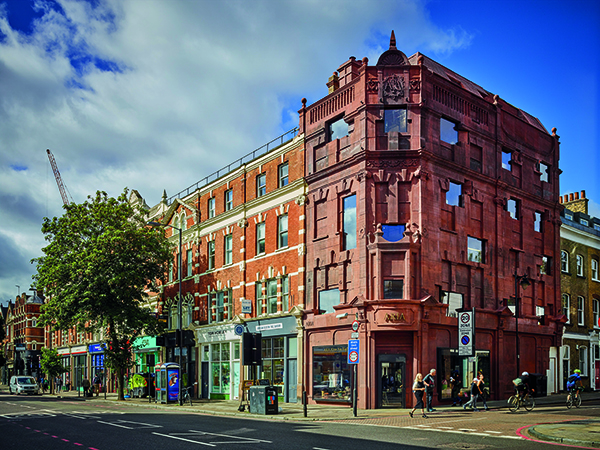 Winner of a 2019 RIBA London and RIBA National Award, 168 Upper Street is a 1:1 cast monument and memory to the Victorian terrace which previously existed on its plot. The terracotta tinted concrete facades deftly play with the themes of memory; actual, imagined, created, true and false.

Painstakingly cast into machine milled polystyrene moulds constructed from photographs and a digital 3D survey of the mirror corner at the other end of the terrace, it creates rather than re-creates sculptural facades which are both energetic and reposeful.

The parade of buildings between Waterloo Terrace and Barnsbury Street act as a prominent and all but intact late 19th Century block fronting Upper Street. In spite of the uniformity of height, party-wall and shopfront town/house rhythm, the original composition conceived as symmetrical Palladian palazzo with a defined centre, extended ‘wings’ with end ‘pavilions’ is strong enough to question the missing part.

This part, 168 Upper Street was significantly damaged during WWII and eventually demolished in its entirety. It remained empty until Aria, a local design and furniture retailer, purchased it in 2012 and held an invited design competition for proposals before taking it through planning approval and construction.

Aria’s aim was to return the original symmetry of the palazzo in all its form and detailing but as a full height double skin insitu terracotta/cement mix fully loadbearing shell, conceived as a 1:1 monument cast from the building bombed during WWII.

Within the monolithic cast shell, new internal floor plates literally represent the new habitation pattern. Located where convenient and of a very different and gentler material, the Cross Laminated Timber Floor Plates are alien to the monument and carried through with new domestic windows cut where required without respect to the older window locations or their surrounding neoclassical detail. Windows have minimal frames with both fixed and operable terracotta panels being recessed into the façade, enhancing the detail reading and mass of the cast terracotta structural shell.

If the structural shell alludes to the past and timber floor plates to today’s potential occupiers, their open floor plans are left as ambiguous space able to accommodate multiple purposes, a tabula rasa awaiting definition. As providers of contemporary furniture, the client, Aria, are aware that carefully selected and combined items can help define purpose and space. To maintain that ambiguity, the potential for change and redefinition, no partition walls, doors with surrounds and bulkheads are installed as these become amalgamated with floors and ceilings to delineate and fix space before it is inhabited.

Instead floor to ceiling cabinetry pieces with rebated shadow gaps disengage from floors and ceilings and are dispersed across the plan. Equipped with drawers, cabinets and open shelving, they combine with integrated full height pocket and pivoting doors to seal off areas when required but appear as temporary and mutable so the sense of open flexible space is retained. Bathrooms and kitchens are similarly conceived as either walk-in cabinets or storage walls.
To ensure the restoration wasn’t an attempt to perfectly mimic the past nor part of an incremental development and representation of the neoclassical language but a critique of that processes and the nature of memory, the choice of construction and fabrication processes was key. The external wall construction is a 1:1 hollow cast of the existing building formed with an in-situ cast terracotta wall half a metre thick which performs load bearing structure, external and internal finishes and thermal performance. Whilst this presented a complex and technical construction challenge, the process itself brought opportunities to explore and enhance the notion of representation of past traditions. 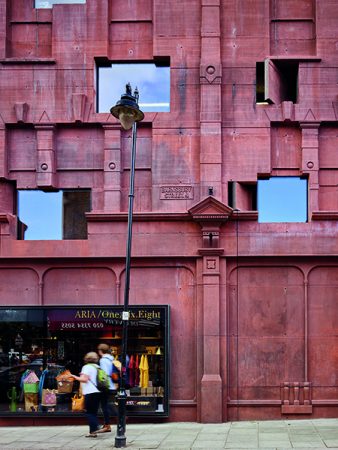