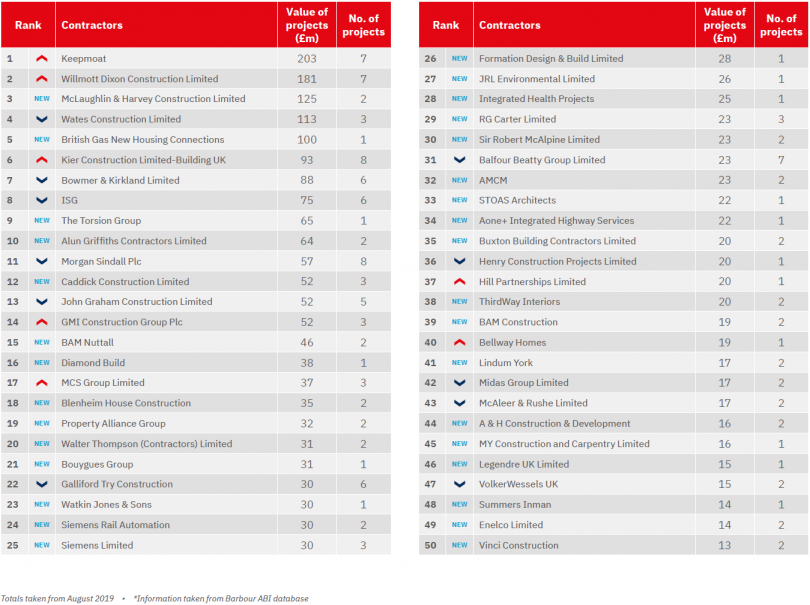 At first position in the Barbour ABI Top 50 Contractors league table for August 2019 is Keepmoat, moving up 18 places with seven contracts awarded valued at a total of £203 million. The largest project award was a new academic building for the University of London at a cost of £120 million.

In second place is Wilmott Dixon, moving up eight places, who have also been awarded seven contracts, at a total value of £181 million. Major re-development works at Wimbledon for the All English Tennis Club contributed £80 million of the total. In third place sits a new entrant to the Top 50, McLaughlin & Harvey who totalled £125 million from two awards, the York Potash Facility providing almost all the total.

The contractor with the highest number of projects was Kier for a third month running. However, this month they shared the top spot with Morgan Sindall, both had eight awards each.

Sat at the top of the 12-month rolling table is the Mace and Dragados joint venture to deliver the HS2 Euston Superstation, closely followed by another joint venture for the Sellafield SRP Process Facility which involves Morgan Sindall, Doosan Babcock Power Systems, Wood Group and KBR.

Tom Hall, Chief Economist at Barbour ABI said, “August was a quiet month for contract awards, no doubt due to the summer holidays and ongoing Brexit-related uncertainty. The top contractor for the year remains Mace and Dragados, thanks to the HS2 Euston Superstation contract awarded earlier in the year, worth £1.65 billion. However, this week, Transport Minister Grant Shapps announced that HS2 will be delayed by up to five years. This will put back the pipeline of HS2-related projects that are due to start, causing uncertainty for the companies that are hoping to support the construction of this unique project.”