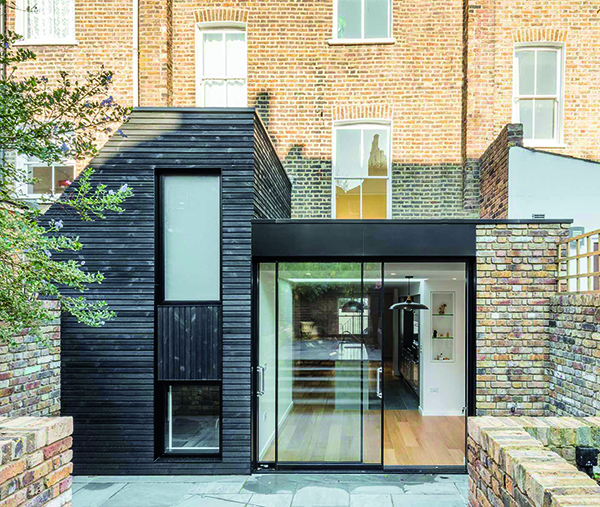 A sculptural, timber clad extension on a constrained site has been added to the rear of a 19th Century duplex apartment in an Islington Conservation Area.

Holland Harvey Architects worked alongside Get Turner Construction to enlarge, update and transform a two-storey flat into a stylish and modern apartment, with work taking place from March 2018 to September 2018.

On the lower ground floor the bathroom was removed and the rear extension was demolished, making way for the construction of a new, larger extension providing space for a good-sized kitchen and dining area alongside the living room. A semi-basement was then created for a utility space and boiler room preserving valuable space in the kitchen upstairs.

A glazed single storey infill, featuring a large roof-light and green roof, creates a new dining room leading out onto a garden terrace, whilst internally a new open plan kitchen and lounge leads down into the semi-basement layer beneath a new modern bathroom.

Clever design has enhanced the natural light coming in to the space with a large roof light and slim-framed sliding door in the new extension. The slatted vertical balustrading for the new staircase and LED light strip beneath the upper hand rail also add much needed light.

The upper corner of the extension has been folded back to mitigate any impact on the neighbouring property – a feature driven by planning policy that ultimately shaped the design.

The building is clad in timber which has been charred using a Japanese technique known as ‘shou-sugi-ban,’ to preserve the wood through carbonisation. The timber itself is a Norwegian product which uses environmentally led technology to provide an alternative to threatened and endangered tropical hardwoods and traditional impregnated wood.

Seen as a stand out feature, the charred timber cladding sits in bold contrast to the textures and colours of the mixed bricks and glazed doors. The patio, steps and walls outside were all re-done to create a stylish two level outside space.

Following completion of the work, feedback has been positive with the client pleased with the end result. 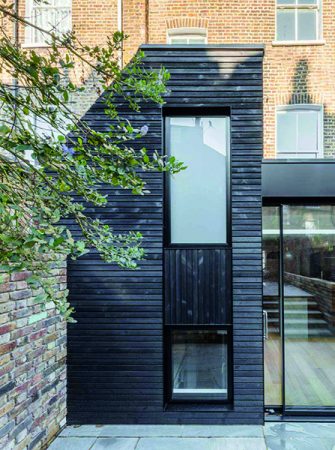 Holland Harvey Architects is an architectural studio based in East London. Founded in 2012 by Richard Holland and Jonathan Harvey their approach is design led and they focus on process and strategy to deliver innovative projects as a solution for complex design briefs.

The RIBA Chartered practice is driven, focused and agile and able to forge personal relationships to ensure that their design solutions are perfectly suited to their clients’ brief and budget.