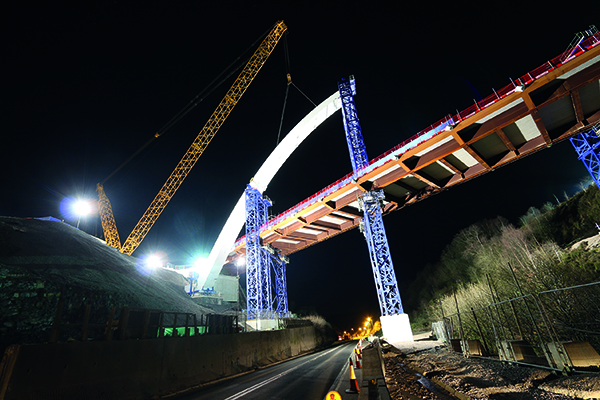 A465 Heads of the Valleys Dualling

The A465 runs across the northern edge of industrial south Wales Valleys. From the M4 west of Swansea, the road runs parallel to the M4 and connects through to the M40, and on to the English midlands, providing an important west-east connection. This road forms part of the Trans-European Road network (TEN-T) and is one of the most varied and scenic major routes in the UK.

The majority of the A465 was built in the 1960s and 1970s and has been periodically updated to a dual carriageway since the 1990s. The unimproved section of the road is congested at peak times, has a poor safety record, and limited opportunity for safe overtaking.

A project was started in 2000 to dual 40km the A465 between Abergavenny and Hirwain to complete the upgrade of the route. The project was split into 6 sections:

PREMIER ENGINEERING spoke to Matt Enoch, the Welsh Government’s Project Director who talked us through the project in more detail:

“The completion of this project will represent the equivalent of over £900m of capital investment in   the Heads of the Valleys region. It will provide a continuous safe and reliable dual carriageway from the ferry ports in the west of Wales all the way across to English Midlands. It will also improve connectivity across the south Wales valleys and access to the main cities such as Cardiff, Swansea and Newport.

“The project was split into six sections at the outset to enable a phased delivery. Construction has been ongoing on and off for nearly 20 years and will take another five years to complete. Budget restrictions and consideration of different procurement options as the industry has evolved, have been the main reasons why the project has been delivered over a prolonged period of time.”

Up to present day, three of the sections have been completed with one currently under construction and the last two currently in the middle of their procurement process.  Each of the sections was designed with interim junction arrangements at each end so that they could operate safely and efficiently before adjacent sections were built.

Below, Matt gives a more in depth explanation of sections completed in order of earliest completed, to the ones still to be delivered:

“Section 4, (Tredegar to Dowlais Top) was the first section to be constructed followed by Section 1 (Abergavenny to Gilwern). The order of delivery is not sequential but was based on a priority order established from historical traffic collision data.  The delivery of these first two sections was based on the outline design and environmental impact assessment developed in the late 1990s by Babtie (now Jacobs) who were our Technical advisers at that time. Each section of dualling is between 5km and 8km in length.”

“Section 4 was 5km long and was finished in 2004 at a cost of £47m. The scheme was primarily on-line widening of the existing A465 and delivered by a Hochtief/ Alun Griffiths joint venture using a design and build (D&B) contract.

“Section 1 was 6km long and was finished in 2008 at a cost of circa £60m. The scheme was primarily on-line widening of the existing A465 and delivered by a BAM Nuttall using a D&B contract.”

“ Section 3 was the first on the A465 to be delivered as an early Contractor Involvement (ECI) contract as this became Welsh Government’s preferred procurement option for schemes of this nature.  Different to other sections the scheme was two-thirds off-line, building a new road corridor north of the existing A465. Section 3 was 8km long and delivered by Carillion at a cost of £160 million. The scheme was part-funded by circa £80m from the European Regional Development Fund (ERDF).

“On Section 3 we took the chance to review the original design to consider if changes in land use, Ministerial priorities or legislation allowed opportunities to improve the scheme to be delivered. This review introduced a number of changes to the original design including providing active travel routes, laybys, picnic areas and viewpoints to support tourism in the area and access to the Brecon Beacons National Park. This design review has also been the future of the sections that followed Section 3 and has resulted in a number of improvements to the schemes taken forward.

“Section 3 was also the first scheme where delivery of a range of Community Benefits became a mandatory contract requirement. The A465 runs through some of the most deprived areas of the UK in terms of unemployment and social challenges in large part due to peripherally and the loss of heavy industries in the area. Any large capital scheme must ensure opportunities exist for work packages, training and employment for local businesses and people.

“Section 3 delivered an impressive range of community benefits in line with Welsh Government expectations. This included 84% of the project cost being spent with Welsh companies with an estimated impact on the Welsh Economy of £180 million. 85% of the workforce was Welsh with 40% from the Heads of the Valleys area, giving people an opportunity to find a job close to home. 27 Trade and professional apprentices were completed on the project while over 4600 school and college pupils were engaged through 130 a range of activities.”

“Section 2 is currently under construction and is due for completion next year. It is 8km long and is being delivered by Costain as an ECI contract. Section 2 is probably the most challenging section of the project as a whole being an online widening of the existing A465 carried out almost entirely alongside live traffic while running through the narrow, steep sided and environmentally sensitive Clydach Gorge.

“The site topography, traffic management requirements and complex ground conditions has meant that Costain have found the project far more difficult to deliver than they originally envisaged and planned for. As result there is a substantial overspend and programme delay in delivering the scheme and we are working with Costain to mitigate the project position and deliver the remainder of the scheme as efficiently as possible.

“Notwithstanding the construction challenges, Section 2 is delivering a range of employment, social and environmental activities similar to those delivered by Section 3 and the scheme has been awarded a worldwide Green Apple Award for environmental best practice.” 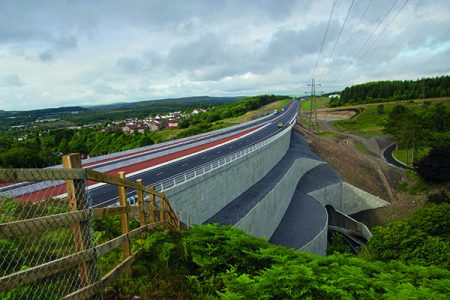 “Costing circa £450 million, Section 5 (Dowlais to A470) and Section 6 (A470 to Hirwain) are the easternmost sections of the project and are being delivered as a single 17km long scheme, via a Public Private Partnership (PPP). This scheme is the first to be delivered using the Welsh Government’s Mutual Investment Model (MIM) and will involve Welsh Government appointing a private sector partner to design, build, finance and then operate and maintain the A465 between Dowlais and Hirwaun for a period of 30 years.

“A specimen design has been developed by Jacobs as our Technical Adviser and we have completed the statutory process to obtain the powers to deliver the scheme. We are currently part way through the procurement process to appoint our private sector partner, and are in the middle of Competitive Dialogue with three bidders. We are undertaking additional structural and geotechnical investigations to better understand the ground conditions and the condition of the existing structures that will form part of the scheme.

“All being well we hope to award the contract and start on site mid-way through 2020. The scheme will take approximately 4 years to build.”

“Completion of Section 2 and then Sections 5 & 6 will finish the dualling project and provide the long-standing commitment for a continuous dual carriageway between the west Wales ports and the English Midlands and unlock the full range of benefits. The project will improve road safety, journey times and reliability, but needs to be viewed as solving more than transport problems. Throughout the extended delivery period the dualling of the A465 has had widespread political and public support over successive Assembly periods because of its role in supporting the regeneration of the area.

“Both during construction and once opened the project has contributed significantly to the objectives of the Heads of the Valleys Regeneration Strategy at that time which has recently been replaced by the Valleys Task Force.

“The delivery of the project is providing continuous employment, training and education opportunities for a prolonged period of time as each section is constructed. Once the road is opened it provides opportunities for active travel, reduces community severance, improves connectivity between employment opportunities and the available workforce as well as improved access to key public services. I hope and believe that the dualling of the A465 will be a key milestone is supporting a prosperous future for the region.”