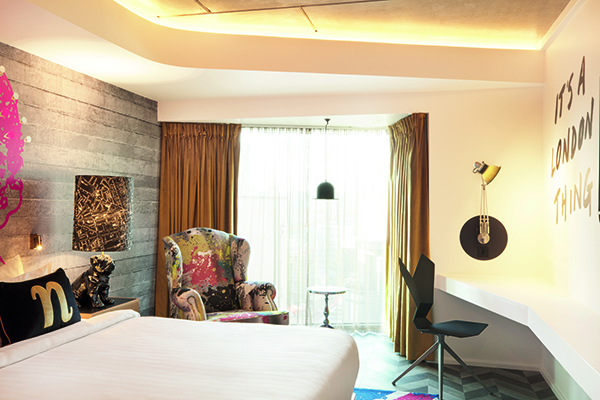 nhow is a brand that surprises and inspires its guests by offering them an unconventional experience, which is unique to each hotel’s location. nhow London, which opens in September 2019, is part of the exciting new development, 250 City Road.

London-based Project Orange is responsible for the interior design of nhow London, taking on the theme ‘London Reloaded.’ Throughout the hotel, bold and fresh design takes inspiration from traditional British icons including The Royal Family, London landmarks and the underground. All have an unconventional and contemporary take, with stand-out features including a Big Ben rocket sculpture in the lobby, tables featuring cockney rhyming slang and oversized gold bell lights – a reminder of the city’s famous church bells.

The layout of the hotel has most of the public space at ground floor, so it was essential to make an impact upon arrival. The first thing guests will see is a sculpture designed by Project Orange of Big Ben Rocket Men, which depicts the iconic monument taking off into space! The lobby and bar have a refined industrial feel, with a polished grey floor, green profiled metal cladding behind the reception and a wooden slatted box which conceals the kitchen. As you enter on the right hand side, a sensuous curved reception desk makes for a friendly place to check in, lit from above by four deconstructed tailored jackets. Behind the reception, a low-tech series of TV screens showcase interactive art work – beaming a mixture of news, history and local sights across the space. Eclectic groups of colourful furniture sit on pixelated rugs, while around the fire place a dynamic explosion of timber boards creates the snug. Finally, the fire uses the latest technology using water vapour and flickering LEDS lights making it completely safe.

Throughout the lobby structural columns are clad in OSB board, usually associated with building sites, and sprayed with colourful street art by local artists. Around one is a circular counter which connects to a lower table supported on bankers desks designed as a place to work and hang out. Towards the entrance to the restaurant is an island of seating surrounded by plants, creating an urban oasis.

A shallow ramp leads into the restaurant, which is a disruptive version of a traditional public house. Here a green leather banquette snakes around the whole edge of the room, against which sit tables carrying messages in cockney rhyming slang. Huge gold bell lights, reminiscent of the famous city church bells gently illuminate the space. In contrast, the central column is lit up by a pixelated mesh of LED lights creating an ever-changing moving image. Next to the service bar is another piece of art work depicting a giant dart board with a screen at its centre.

Moving down to the basement via the concrete stair, guests arrive ‘underground.’ Taking inspiration from the iconic London Underground, the yellow and black graphic theme is derived from the platforms and tunnels, as an arched corridor leads through to the WC’s and gymnasium. 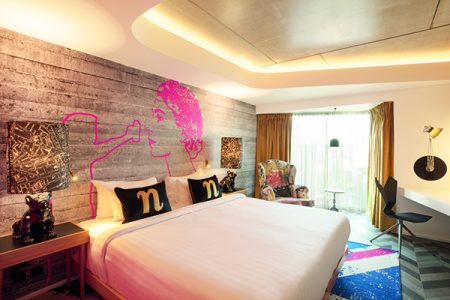 Taking the gold elevator up to the upper floors, there is a collection of three meeting rooms or laboratories, celebrating retro-futurism as found in the working 1980’s computer games, the rusty metal grid wall and consoles full of semi-redundant technology. Luxurious green velvet cushions sit on the pixelated houndstooth carpet next to giant chesterfield sofas and modern-antique meeting tables.

The guest corridor has been designed as a theatrical evening walk along a London street, the carpet strewn with rose petals. Outside the lifts the walls depict metal railings including a bicycle chained up, while the panelled front doors to the bedrooms feature traditional brass handles and even a door knocker.

Inside the rooms there are defiant colourful textures mish-mashed to create a memorable alternative version of London. The parquet floor has highlights of Pillar Box Red, which is echoed in the bathroom wall clad in glossy ‘Victorian Anaglypta’ textured wallpaper. The wardrobe doors have a microchip pattern cut into them, while the regal bathroom door is gold. The giant bed sits on top of a punk Union Jack rug, behind which a concrete textured wall is adorned with a sprayed on graphic of the Queen. By the window a traditional armchair is covered in graffiti velvet with a reading light made from a bowler hat. Opposite the bed there is a moment of calm with the white wall turning into a linear desk above which sits the TV surrounded in a brass frame. In contrast the bathroom is an immersion into British racing Green with its gridded tiling, terrazzo-style floor and a traditional roll top sink. A cheeky artwork, the size of the wall, features images of historic Monarchs that have been gently pixelated.

Overall the aim of the hotel is to elevate a guest’s stay with an unexpected playful London experience, inspiring them to explore the city. References have been taken from architectural icons to royal protocol to vibrant street art. It is unlike any other hotels and is guaranteed to stand out.