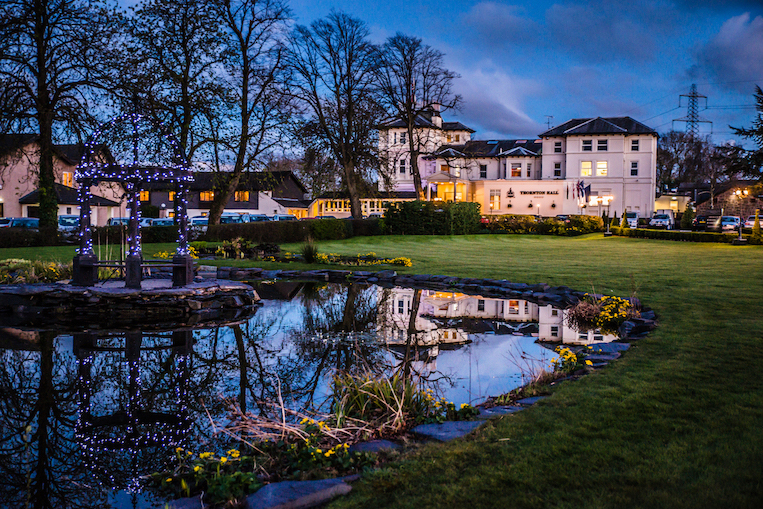 The renowned restaurant at 4* Thornton Hall Hotel & Spa, on the Wirral, has been awarded three AA Rosettes in recognition of the quality of its food and fine dining experience, the only restaurant in Merseyside to do so. Described as having the ‘full culinary package’, the team at The Lawns restaurant were presented with the sought-after accolade at the prestigious AA Hospitality Awards in London on Monday 23 September.

The long-established Rosette scheme celebrates exceptional cooking, with success or failure being based on one or more visits by an AA inspector. About 10% of restaurants nationwide are of a standard that is worthy of one Rosette and above and to secure three AA Rosettes, restaurants must achieve standards that demand recognition well beyond their local area. Only a small handful of restaurants hold three AA Rosettes or above, cementing the amazing achievement it is to be awarded the prestigious accolade.

In awarding the triple AA Rosettes to The Lawns, an AA Hospitality Inspector said: “The grand spa hotel on the Wirral peninsula has an unerring sense for an occasion. Head to The Lawns dining room for the full culinary package, where, amid a setting of teardrop chandeliers and ornate wood carvings, the modern British cooking makes very good use of local produce using modern techniques.”

The Lawns, at Thornton Hall Hotel & Spa in Thornton Hough, is the only restaurant in Merseyside to hold three AA Rosettes awarded for its superb international cuisine, combined with an extensive selection of wines from around the world, which accompany it’s a la carte and tasting menus.

Geoff Dale, General Manager of Thornton Hall Hotel & Spa, said: “Locals are already well aware of the quality of our food, but word is certainly starting to spread nationally and these three AA Rosettes are testament to the dedication of our team at The Lawns, with Richard at the helm. I’m proud of the whole team here at Thornton Hall, who always strive to deliver outstanding service – and it shows.”

The team at The Lawns were presented with their award in front of an audience of world-renowned chefs, prominent hoteliers, restaurateurs, hospitality gurus and key media. Hosted by BBC newsreader Kate Silverton, the AA Hospitality Awards – an exclusive black-tie event – took place at the luxury JW Marriott Grosvenor House on Park Lane, London.

Andrew Thompson, CEO of Thornton Hall Hotel & Spa, said: “We are so thrilled to receive three AA Rosettes and be the only restaurant in Merseyside to do so. Our team have worked incredibly hard for this and I couldn’t be prouder.”

To find out more about The Lawns and Thornton Hall Hotel & Spa, visit: https://www.thorntonhallhotel.com