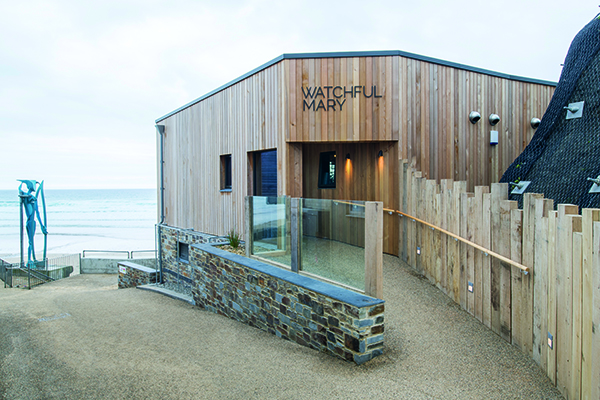 Operated by the Ashworth family, Watchful Mary is named after the ray of green light that, in certain conditions can be glimpsed as the sun dips below the horizon off the sea.

The bar is located in a new two-floor building replacing the original Royal National Lifeboat Institution hut. The first floor provides a larger, purpose-built permanent home for the lifeguard service and also includes a new area for the Watergate Bay Surf Lifesaving Club. The second floor and terrace holds the new bar, which offers small plates, sangria, craft beers and classic cocktails with a twist, as well as live music at the weekends.

PREMIER HOSPITALITY MAGAZINE spoke to Matt Hulme of Dynargh Design about his design of the bar that took 12 months:

“This was a brand new client for me. I met the owner by coincidence at their hotel in the Lake District and it led from there. They asked me to meet them when I was next in the local area, and it sort of snowballed over the next 18 months.

“The client had a clear operational brief. They wanted to do a destination bar and because of its location (right on a cliff wall) they wanted it to be about the view, and they wanted it to be its own entity aside from the hotel. Aside from that, I was given the empty space from an architectural point of view and told to come up with ideas and a concept. In terms of a design perspective, they were very trusting.

Matt said that the views from the bar were the inspiration for the whole design of Watchful Mary. He’d stood out on the beach before the bar had been built and looked at the plot of land it was going to be built on. He felt that the sea wall and architectural element of the bar should be connected strongly so the concrete on the back wall of the space replicates the sea wall below. Matt said that element led to more hard surfaces being included throughout the design.

The detail on the bars ceiling was taken from the ripples created in sand after water had washed over it, making sand reflect onto the ceiling. Other design details include worn timber flooring that look better worn and battered over time and lighting that creates a statement; especially for the darker months where the sea view disappears as the day does before the evening.  The bar is also sunken and there’s a raised platform either side so that people can see over the top of the people who are sat lower down, ensuring that everyone gets the sea view.

“The big thing for me was trying to use as many local trades as possible to highlight Cornish talent. For the design overall, it was to make it look lived in and relaxed straight away. I’ve spent quite a bit of time in Australia and it was to create this sort of Australian/Asian feel because there’s nothing like that in Cornwall.  It was to create something other than the classic kitsch style, and throughout I had this image in my mind of music drawing people up from the beach. The bar hosts live music sessions and gigs on a Friday and Saturday night and they really embrace the feeling that I was trying to achieve.”

“It’s going really well. From Instagram and everything like that, there’s a lot of love going on at the bar and the clients seem over the moon. From a client point of view I think they’re really pleased with it which is good.

“It’s been huge for us because they’re a really prestigious hotel to be working with and a lot of people know the brand and the name. It’s been quite an honour to be invited to work with them and create something really unique for Cornwall.”

To find out more, visit: http://www.watchful.co.uk/