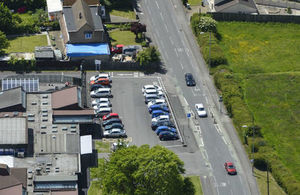 Safer journeys are on the way for cyclists, pedestrians and schoolchildren thanks to an investment by Highways England in the Midlands.

Work will be carried out improving the footpath and cycle route near to junction 10 of the M6 to ensure the safety of local people and provide an alternative route when major works get under way on the Walsall roundabout.

Local people and businesses are invited to a public information event on Friday 11 October to find out more about the new Connecting Bentley route. This will bring improvements for pedestrians and cyclists along Bloxwich Lane, Churchill Road and Queen Elizabeth Avenue, creating an improved continuous link to the north of M6 junction 10.

The work will be carried out thanks to a ring-fenced fund provided by Highways England to address issues beyond the traditional roads investment.

Designated Funds are allocated to schemes that improve the surroundings of the Highways England road network and benefit those who live and work alongside it.

When the main construction works for the £78 million upgrade of junction 10 are under way, access for pedestrians and cyclists will be restricted in the area and an alternative route will be needed.

The upgrade of the junction will ease congestion at the notorious bottleneck in Walsall and is due to start in the new year. The bridges over the motorway are to be replaced, increasing the junction to four lanes, and avoiding the need for extensive maintenance as it is now over 50 years old.

This is a joint venture between Highways England and Walsall Council, supported by the Black Country Local Enterprise Partnership.

The improvements being carried out as part of the new Connecting Bentley route include:

The scheme will link in with the existing cycle route on Churchill Road and the cycle improvement measures installed as part of a recent Local Safety Scheme on Bloxwich Lane.

The work, which starts on Saturday 26 October, will involve some temporary traffic lights and lane closures to enable the upgrade to be carried out safely. It should be completed by the end of March 2020.

More information is available at the public information event taking place on Friday 11 October between 2pm and 6pm outside the shops in the Bentley Public Realm area.

Highways England Project Manager David Reed said: “We understand that major schemes such as the much-needed upgrade of junction 10 can cause disruption for local communities and we appreciate people’s patience.

“Our designated funds enable us to provide environmental, social and economic benefits to the people, communities and businesses who live and work alongside our strategic road network.

“This particular project will improve safety for pedestrians, cyclists and schoolchildren in the area not only during the junction 10 works but beyond.

Deputy Leader of Walsall Council Adrian Andrew said: “The improvements to junction 10 will transform journeys for residents and commercial traffic. These additional improvements bring benefits to the wider community providing a safer environment for cyclists and schoolchildren alike.”