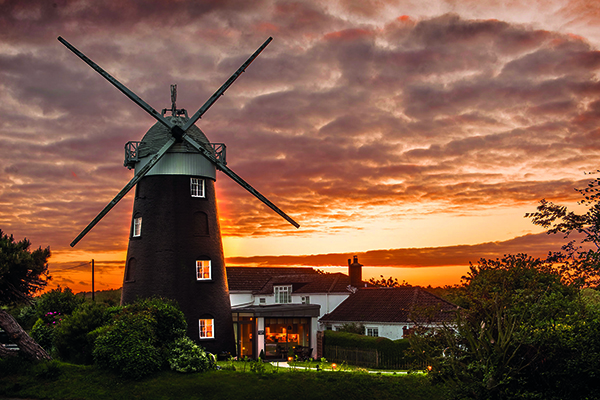 Highly Commended in the LABC category of Best Change of Use of an Existing Building or Conversion, Stow Windmill based in Norfolk is one of the most unique ideas of a holiday let that there could be – a converted windmill.
Until 2015, Stow Windmill, situated on the south side of Mundesley on Sea, seven miles south of Cromer on the North Norfolk coast, was open to the public as a tourist attraction. It is a renowned North Norfolk landmark standing proudly only 400 yards from the cliff top. Today it stands as an exclusive, totally modernised and stunning living space on three floors linked to an impressive kitchen/diner by a glazed link. No expense has been spared in its renaissance and new visitors can now experience a transformation that provides attractive and comfortable accommodation within its unspoilt circular tower.

“When my wife Andrea and I moved to our new house just outside of Mundesley in 1999, we also took ownership of Stow Windmill standing in the garden. Our first intention was to make the mill into a successful tourist attraction.  We had high hopes that we could create an exciting historical building to visit. Initially we made improvements to the mill itself, making it safe to guests and introduced informative historical material in framed pictures on the walls.  Additionally, we opened a gift shop selling souvenirs and refreshments which we had created in the adapted garage at the front of our house.

“However, when the recession arrived and the holiday village opposite began to lose popularity, we decided our efforts were wasted. During a period of 13 years we had no support from North Norfolk tourism, no funding, and promises that were made by all sorts of projects, remained unfulfilled.

“Older and a little dispirited, we felt it was time to win some of our investment back. In 2013 we began investigating the idea to convert the mill into a holiday let, deciding this approach would be the most financially rewarding way for us in the future. It would also provide the mill security in the years to come.  After two refused planning applications, and then a third successful one, building work and conversion to the mill started in 2016.

“The finished conversion provides a modern and well fitted kitchen/diner in a small block newly constructed outside the mill connected to the tower by a glass link. The ground floor of the mill, accessed by three steps through glazed fire doors off the glass link, is a lounge in which an open treaded helical staircase sweeps up to the first-floor bathroom and dressing room area. A further staircase from this first-floor curves and continues the climb up to a bedroom on the second floor. “During early preparations in the building work of the unrestored mill, it was discovered that a serious problem had developed in the ‘Cap’ of the mill from water penetration. We immediately realised that repair was necessary and would be extremely expensive but concluded that the mill should be restored and brought back to life, with the Cap turning the sails ‘into wind.’ Completion of this work, being carried out by the millwright Paul Kemp, all going smoothly, should be done by November.  New bookings are already being taken from December and into the New Year and visiting guests will then be able to enjoy the experience of staying in a modern, transformed but ‘working’ windmill. We believe it will be the only mill of its kind in the UK.”

Stow Mill now calls out to attract the relaxed, the romantic, the discerning and the enquiring visitor who wishes to enjoy a luxurious experience with a difference.

To find out more about book information, visit: https://www.stowmill.co.uk/ 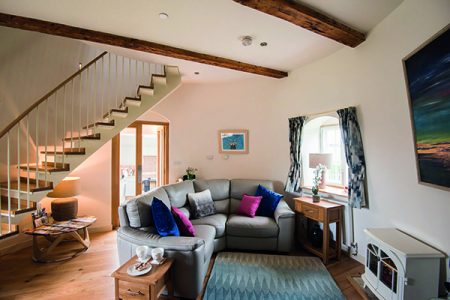