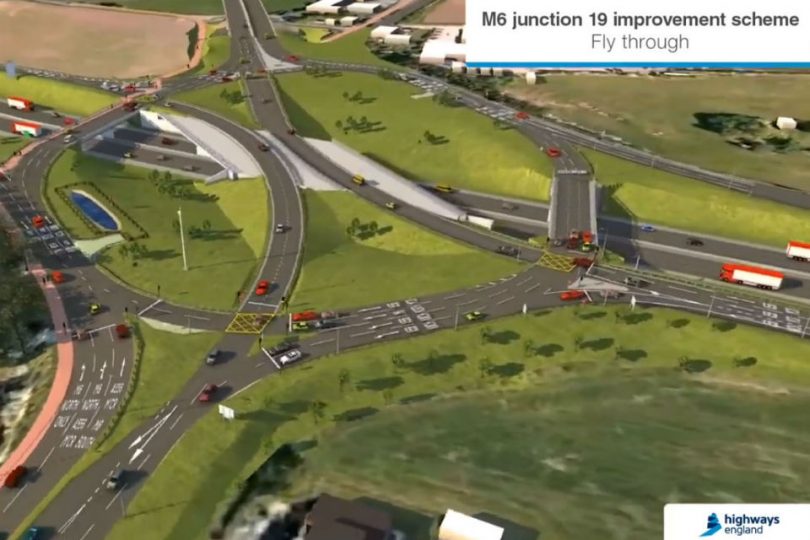 A multi-million-pound transformation of a key motorway junction in Cheshire will get underway next year after the Government gave the green light for the project.

Junction 19 of the M6 near Knutsford is to benefit from a £43 million overhaul – with a new bridge through the existing roundabout and over the M6, creating a better flow between the motorway and the A556.  This will speed up journeys and reduce congestion around the roundabout itself. There will also be improvements for pedestrians and cyclists.

The £35.5 million contract for the detailed design and construction of the new bridge and other improvements was awarded to a joint venture between Amey and Sir Robert McAlpine earlier this month. Both firms are delivery integration partners (DIPs) in ground-breaking new arrangements with Highways England’s supply chain delivering almost £9 billion of improvements over the next few years.

Highways England project manager Jamie Carruthers said: “Our priority is to deliver this junction improvement safely and minimise any disruption from these and other roadworks in the region and we’ll be providing more details at public information events in the new year.  We’re now working with colleagues to confirm a start date in the spring.”

The roundabout already provides a free-flow link from the Knutsford and Bowdon bypass onto the southbound M6.

The Government’s green light for the scheme – confirmed earlier this month – follows public consultation in 2016 when the  ‘Option A’ idea of providing a new bridge across the middle of the roundabout received the backing of three quarters of drivers, Cheshire East and Tabley councils and other local people.

More information is available on the official project webpage where people can also sign up for regular project updates.

The roundabout project is part of a half billion pounds investment to improve journeys along the Midlands to Manchester and Manchester Airport corridor. The A556 Knutsford to Bowdon bypass was opened more than two years ago and the M6 junction 16 to junction 19 smart motorway was completed in March.  Work to construct a smart motorway along the M56 between the A556 and Manchester airport is also due to start next year.