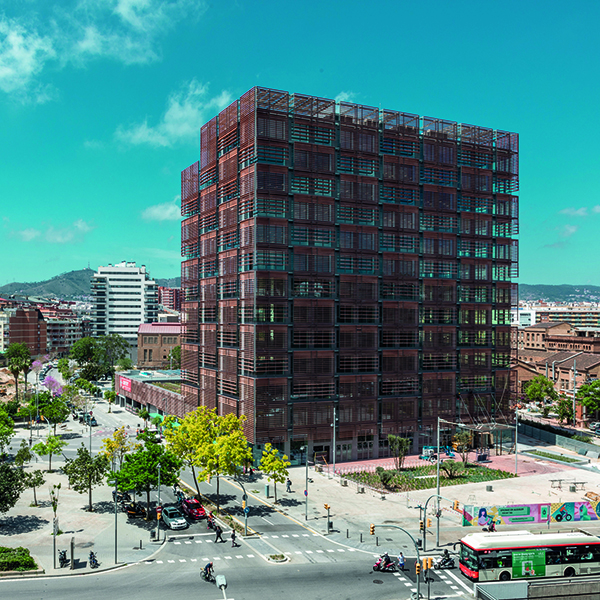 The Ó Office Building is located within the former industrial precinct of Can Batlló, one of the most important developing areas in Barcelona, and is directly related to the economic district of Hospitalet de Llobregat and main avenues such as Gran Vía and Avenida Carlos III.

The building’s volume contains one main twelve storey tower, hosting offices, and a high ground-floor volume hosting the main commercial activities. This liberates part of the plot, offering private space for public use.

The space for public use on the ground floor establishes pedestrian connections between Carrilet Avenue, Gran Vía, and what will become the Can Batlló Park, where the city will incorporate public facilities such as Barcelona’s Audiovisual Media School or the New Central Municipal Archive.   Several urbanized spaces developed on the ground floor relate to the building’s architecture to the city in a delicate way through flower beds and vegetation. The existing relationship with the urbanization project of Can Batlló is recovered through the ceramic cobbled pavement, making it feel less urbanized and more in touch with the environment.

Workspaces are conceived as diaphanous, with an open plan relegating the structure only to the core and the facade’s perimeter; with a homogeneous facade solution ensuring the building’s thermal and energy efficiency in conversation with the surrounding industrial landscape.

The surroundings hosts recently renovated buildings such as the Audiovisual Media School, or buildings that will be renewed such as the city’s New Central Archive. The Ó Building shares a common material language deploying mainly ceramics in a broad range of building solutions.

Industrialized building systems have been conceived in order to achieve maximum sustainability. Through the control of these solutions and materials the build has been able to obtain a final LEED GOLD qualification. The material selection begins at the drafting of the project and is supervised along the whole construction process, requiring technical rigor regarding the ecological footprint of the building.

The envelope is made up of two different systems. A ventilated facade with large porcelain ceramic tiles and a solar protection made out of a ceramic slat trellis provide the building’s iconic image. Differentiating requirements according to orientation, allowing the control of solar radiation and ensuring permeability and vision from the interior, the ceramic trellis completes a volume staggered on its upper levels providing private terraces for its users and singular gathering spaces with views connecting to the Sants district.

The ceramic slat system both links the building to its surroundings and becomes the building’s main control system of its energy demands, minimizing solar radiation on southern elevations without compromising the compositional logic of the different elevations.

The building differentiates the main common areas of the lobby and the multiple use hall high ceiling spaces, where both vertical and horizontal facing single out spaces clad mainly with wood and large scale porcelain ceramic tiles opposed to the exterior ceramics.

The ground-floor volume’s roof, as well as liberated spaces at the entrances, allow for landscaped areas that blend in with the former industrial precinct and the existing urban logic. Large landscaped areas are set on that roof, main relational spaces for users, creating the fifth elevation of the building directly linked to existing vegetation elements outside the building’s plot.

The automation and energy management systems of the building as well as the implementation of BIM methodology throughout all phases of the building’s life cycle including maintenance, and large bicycle parking spaces providing a wide range of mobility options for its users complete the proposal. The Gran Via Ó Office Building was shortlisted in the WAF 2019 Awards (World Architecture Festival) in the ‘Completed Buildings – Office’ category. The WAF awards are where the architectural community meets to share expertise and learn from each other. By attending the World Architecture Festival, they gain inspiration and ideas. ​It is the only global architecture festival that combines awards, seminars and networking. At the heart of the festival sits a unique live-judged awards programme.