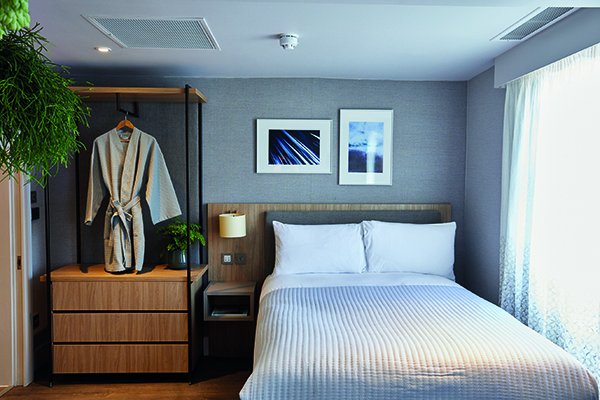 Inhabit Hotel brings a brand-new concept to London; the first boutique mindfulness hotel with emotional, mental and physical wellbeing at its core.

Nestled down some charming mews in thriving Paddington, Inhabit invites its guests to join a community with the core values of social connection, intellectual expansion and environmental responsibility.

Architects Holland Harvey and Caitlin Henderson Design have collaborated on Inhabit, fusing cultural and design influences from across the world to create a new experience for guests, with a focus on community.

“Above all else, our goal has been to create a comfortable, welcoming environment for guests. Featuring an open kitchen, dining room, lounge, library and snug, Inhabit provides spaces in which lingering is encouraged, providing both hidden corners and large tables for social interactions,” Richard Holland, of Holland Harvey, told us.

“When designing Inhabit we took inspiration from hotels such as Ett Hem in Stockholm, from the communal dining tables, to a more intimate library space adorned with art, books and curio,” Holland Harvey added.

Caitlin Henderson echoes this sentiment. “There is a big emphasis on original Scandinavian design so we selected, for example, chairs by Hans Wegner, a mid century Danish designer,” she said. “We have also used natural materials including oak in all of the joinery, hand woven rugs from Nanimarquina in Spain. I tell my clients I want them to feel like they are on holiday when they walk through the doors, so it was exciting to have that idea married with the brief of the hotel.”

The hotel’s guest rooms and public areas are filled with artwork curated by Amsterdam-based Culture A, founded by Anne Trouillet Rogers. The pieces – which come in a multitude of mediums, textures and styles – are based around the brand’s core pillars of wellness; environmental, physical, intellectual, emotional, social and occupational. Thoughtful interiors touches include pieces from ethical homeware brand Kalinko, and Studio 306 cushions sourced from Aerende, made by people recovering from and living with mental illness.

At Inhabit, ethical responsibility is key. Holland Harvey pride themselves on using materials honestly, and honoured their natural state in the creation of the unique, light-filled spaces at Inhabit. The Goldfinger Factory, a sustainable design and build social enterprise, have populated the hotel with bespoke furniture made from reclaimed materials, while Globechain helped to reduce waste by diverting 273 items, weighing a total of 2,934 kg, from landfill during the building process.

Rooms designed for rest
Inhabit’s rooms have been designed with a good night’s sleep as first priority. Guests will find everything they need for a restful stay, from balancing magnesium and kelp toiletries from REN and soothing, bespoke aromatherapy scents, to a comfy, eco‐friendly VOC-free Casper mattress. Inhabit’s rooms are incredibly considered, with Caitlin using the psychology of sleep to inspire their interiors.

“We looked at the psychology of colour and how it affects sleep, especially in the bedrooms, and we found that grey, green and blue are conducive to high quality sleep,” she explained. “Even though the hotel is in central London we want the guest to feel as though they have escaped the stress of the city.”
Nourish from within

Inhabit have collaborated with Yeotown Kitchen, a local mindfulness cafe to serve up delicious, nourishing food to guests. Peruse their curated menu of juices, salads and savoury bowls, inspired by character traits such as ‘forgiveness’, ‘integrity’ and ‘creativity’. Yeotown founders Mercedes and Simon Sieff are the minds behind award‐winning rural Yeotown Health Retreat in North Devon and the first Yeotown Kitchen café on Chiltern St, London. Mercedes and Simon have not only devised a unique menu for Inhabit, but also a series of meditation tapes to uplift, energise and inspire guests in the on-site meditation pod.

Our hosts at Inhabit look forward to welcoming you on their journey towards a positive social and environmental impact – on their guests, their lifestyles and the future for all.