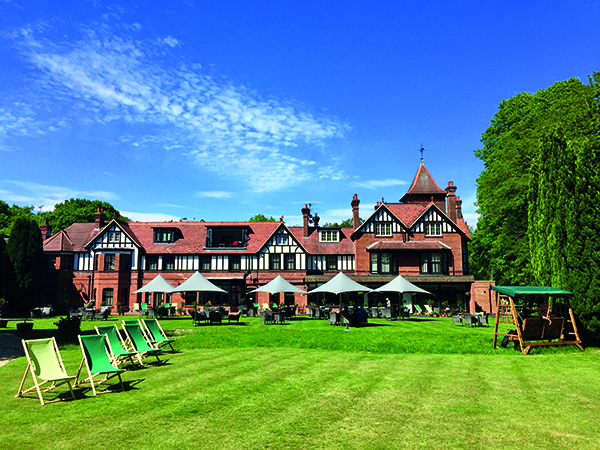 Located in Brockenhurst village is the independently owned iconic country hotel, Forest Park, perfectly located within the heart of the New Forest National Park and only a few minutes short stroll from the centre of Brocklehurst Village.

Built originally in the late 19th century to serve as a vicarage, the Tudor renaissance hotel has been re-designed. In its time the hotel hosted dinner for Teddy Roosevelt in 1910, became the General Hospital for Indian and New Zealand military during the Great War, and today stands a refurbished hotel with a tasteful blend of contemporary and traditional forest style to complement the impressive building.

Kevin Wood, Brian Shone & Terry Taylor have had many years of experience in the hotel business and they bought the Forest Park and re-envisioned it. Kevin spoke to PREMIER HOSPITALITY about the process:

“This started after we sold the Oceana hotel group in Bournemouth where we successfully ran the Cumberland hotel and others for over a decade, Cumberland is the highest rated four-star hotel in Bournemouth & Poole. We sold the group several years ago and ever since we have been looking for a country property as a new destination.

We found Forest Park in need of a lot of work. It was a sort of  blank canvas yet we saw the enormous potential and we knew we could go in and lavishly turn it into a fine destination luxury hotel. So that’s what we did.  We bought it last July and ran it up till Christmas, then closed it to do the major renovation. The kitchens, the bedrooms, the elevator, the boilers, everything has been done. In a way it’s almost an entirely new property, but it’s still in the old historic building retaining its country charm.

Before, no one would come here for food but now we have award winning chefs here.”

The Inn at Forest Park has been carefully designed to embrace the ambience of the Forest and an eclectic Country Inn. A perfect place to relax, whether it be for a warm drink after a long walk in the Forest, or to arrive for a dressed up dinner, the modern British menu is designed from majority local sourced produce from the Forest or surrounding Counties , and the Chefs are proud to prepare their dishes from locally sourced produce.

In addition, the Bar at the Inn is specifically built for guest enjoyment; crafted from oak, brass and copper. It is carefully stocked with a unique collection of craft beers and lagers, local & international wines and spirits, including whiskies, rums, gins, mezcals and the exclusive distilled for Forest Park BROCK gin, infused with Forest Botanicals.

“It’s quite a popular hotel locally, and it’s loved locally. We started work October 1st last year and opened April 12th, taking six months. We did it in two stages. The ground floor, kitchens and public areas were done during the second half of the renovation so we had to close during that stage as you can’t operate without facilities.

“It’s completely different now; very bespoke with a country hotel look including designer fabrics and wallpapers. Everything we’ve put in has been very high quality and designed by Sue Mirco of AG interiors. The bar was custom made by Atlas Group and includes copper and brass and leather; it’s just a beautiful place.”

With the hotel being centred in the New Forest, it is a haven for walkers and cyclists, many of whom manage glimpses of deer, wild ponies, boar and wandering cattle or catch the soft sounds of the elusive New Forest cicada.

It’s a perfect location to slip away from the world and explore the forest wilderness, its history, landmarks and destinations within the comfort of the newly refurbished hotel.

“With any refurb there are always challenges but for the most part it went quite well. We opened on time and we made it happen. It was one of those where the last seven days of it, we were working into the evenings but we did it, we got it open, and we’re thrilled. The feedback has been incredible. When you open a new property you always expect a slight rocky road because it’s all new. To open with such good feedback has been fantastic for the team here and our journey has just begun.” 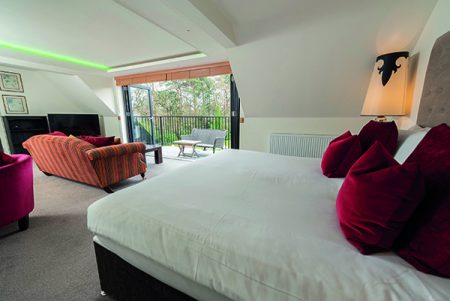