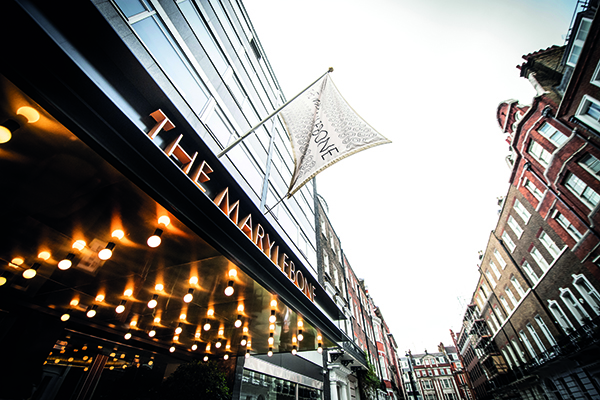 Completed in 2018, The Marylebone recently finished a major three-year renovation, following in the footsteps of sister hotels The Kensington in 2015 and The Bloomsbury in winter 2017.

The latest additions to The Marylebone include three spectacular Terrace Suites, offering some of the most impressive views across London, a sleek new lobby bar, wellness centre, Third Space Gym, indoor pool and state of the art creative and party spaces, and The Marylebone Rooms.

A brand-new lobby and welcome space complete with a sleek and stylish bar offers another social stop and alternative hub to the hotel’s existing 108 Brasserie. The new Lobby Bar was designed in collaboration with Fettle and the in-house design team, led by Chairman of The Doyle Collection, Bernie Gallagher. Together, they transformed the space into a stylish haven. The cocktail bar is divided into four distinct areas including spring, autumn and winter lounges, alongside a stunning summer terrace. Interiors are sumptuous with plush armchairs, panelled walls and a selection of art on display. The lobby bar is the centre point of the hotel and perfectly represents the hotel’s new look, drawing together all elements of design, light and atmosphere.

PREMIER HOSPITALITY MAGAZINE spoke to Andy Goodwin of Fettle in more detail about the Lobby Bar.

“We were recommended to the client team by people we’d previously worked with. Essentially, there’s been two phases of this renovation. The restaurant was developed at the rear of the building opposite the entrance, then they developed meeting rooms and apartments in the centre of the space and above, and our part of the project was to develop the lounges around the entrance area. They wanted to make it into an F&B space and into a cocktail bar that was four separate lounge spaces before. It worked as a lounge and a bit of a waiting space in the hotel but the way that hotels are going, rather than guests sitting in a soulless hotel lobby, they’d rather sit in a cocktail bar where there’s activity and it’s a bit more theatrical.

“Our brief was to develop a new cocktail bar and make sure that it worked within the constraints of the existing site, whilst also making sure that it was different to, but also carried on the language that was set by the other phases, within the restaurant and the meeting rooms.

“The design highlights and the centre of the space is the bar that we designed. The theme we stuck with was the four seasons, so the terrace became the summer, the lounging area is spring, autumn is where the bar is located and winter is in the rear space. Although the finishes are different, there are similar elements linking them together.”

“The new design has been really well received; they’ve been drawing guests in from outside the hotel. It’s been really important, it’s the first standalone bar project that we’ve done and it adds another string to our bow as a studio. It was a great project to work on.”

Days and Nights in The Marylebone Rooms

In early 2018, the completion of the hotel’s new events and party ‘zones’ helped position The Marylebone as the ultimate venue for any social occasion or creative business meeting. The hotel is challenging traditional expectations of meetings and conference venues by leading the movement on what these spaces should offer in the 21st century.

In line with this, the rooms have been designed to transform from meetings and brainstorming spaces during the day, to sleek party venues by night. They offer the facilities and atmosphere of a private members club, complete with oak panelling, leather upholstery and bespoke furniture, tinted mirrors, open fire places and most importantly – natural light. Additional wellbeing options ensure productivity and creativity is encouraged, rather than hampered, with help from the hotel’s The Juicery Menu and Third Space gym – a lunch time yoga session or spin class can be arranged, amongst other options. London based architects, Michaelis Boyd Associates, designed the spaces, which feature fireplaces, bars, plush leather seating and beautiful statement furniture pieces.

The Rooms also offers breakout lounge spaces where people can have more informal discussions and breaks. The largest space situated on the ground floor, named Number Six, even has its own address on Bulstrode Street and comes with a private terrace. Finally, The Courtyard is The Marylebone’s most notable room. The indoor outdoor terrace has been transformed into a glamourous entertainment space complete with built in seating, lush green foliage lined walls, outdoor fireplace and folding roof. 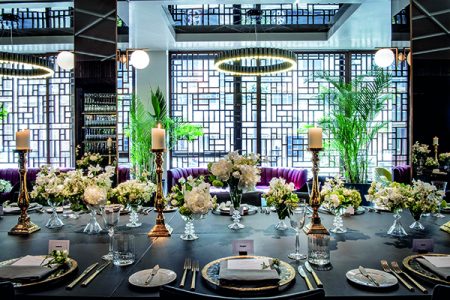 The company’s extensive mirror projects include antique and bespoke glass installations as well as practical products such as glass balustrades and shower screens. The company has built a strong portfolio within the commercial and private sector.

Ideal Glass and Glazing is now firmly established in the South East as a specialist in all glass and mirror design with high profile projects that include; The Hawksmoor Steak House, Harrods, The Bedford, The Queen Elizabeth Hall and The Crazy Bear Group to name a few.

The company has completed mirror and glass installation at each phase of The Marylebone renovation, notably The Long Room, The Blue Room, The Library and The Courtyard as well as various other parts of the hotel.

“It was a pleasure to be involved in such a unique and characterful renovation. From the mini bars and bespoke shower enclosures in the guest rooms to the feature glass walls in the events and meeting rooms, grey tinted mirrors in the Courtyard or the mirrored ceilings in the bar and reception, Ideal Glass and Glazing were there at each phase of the renovation to action and install the glass and mirror vision of the design team.

“The event spaces that were created made great use of mirror to open up the space providing a greater sense of light; and naturally added a greater element of luxury and character to each room.” 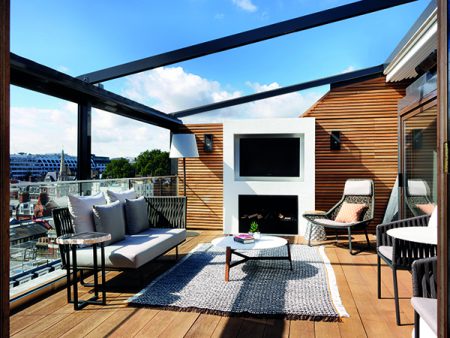