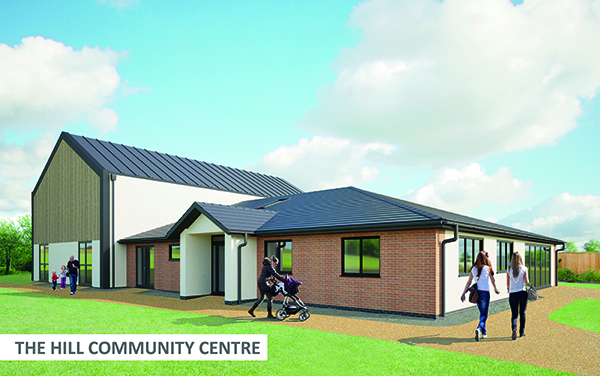 The Hill Community Sports Centre is a new build development completed in September 2019. The demolition of the old site and construction of the new centre began in August 2018 with Cherwell District Council’s selected contractors Edgar Taylor (Buckingham) Ltd.

The site was registered for the Considerate Constructors Scheme, meaning this commits Edgar Taylor to following a code of practice that emphasises respect for the community and environmental protection. The council is also planning a number of consultations and participatory arts projects to support local people who want to get involved in developing the centre and its programme.

PREMIER CONSTRUCTION MAGAZINE spoke to Peter Meadows of Cherwell District Council about the origins of the project:
“The Hill was a much loved local youth club which had developed some significant defects through age and original materials used in its construction.. It was owned by the council and operated by Banbury Community Church. It had several serious issues such as the level of asbestos in the building which had to be addressed. That meant that over time, the usable areas of the building were reduced because parts of the building were off limits due to things like roof leaks and concerns about asbestos. Although it was still in use until we demolished it, it was really just a small meeting space and an office, and it wasn’t seeing much use as a community facility so there was definitely need for a new building.”

He went on to explain the wider community impact:
“The wish was to create a building that served much broader community needs rather than just a youth club. The hope was to offer a community and sports facility. We approached Sports England to see if they were interested in joining in the intended development and creating a sports hall as part of the redevelopment, so we have provided a larger building than the previous one. The new build provides disabled access too.

“The feedback we’ve received from local people that have witnessed the old building be demolished and the new building erected has been very, very positive. They’re pleased to see what was an eye-sore and a source of vandalism and anti-social behaviour, being replaced with a new, fit-for-purpose, building.  The support from the local people has been absolutely tremendous.

“For me it has been really rewarding working with local groups and other functional leisure departments  and a national funder on this project. The council’s Build! team specialises in affordable and supported housing, but on this occasion, we’re working with our leisure services colleagues to provide a building for them, and it’s really interesting working with a cross functional and multi-disciplinary team.  The format and processes that we have established for The Hill can be used for many types of projects, not just construction projects. As I said, members of the local community that I’ve met have been nothing but excited and supportive of the proposal – it’s going to be a very proud moment when we hand it over to Banbury Community Church to run.”