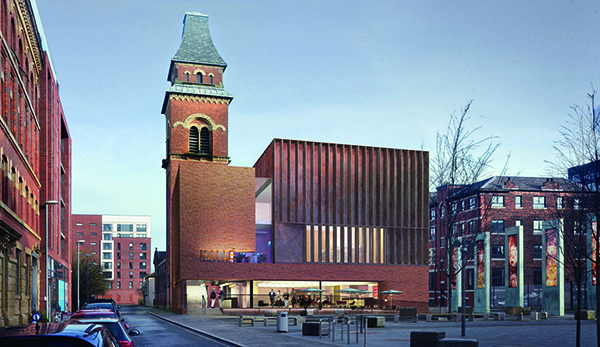 An ambitious £4.3m extension to Hallé St Peter’s in Ancoats, Manchester is near completion. The project, which began on site in May 2018 is due for completion on 18th October 2019 and will include new rehearsal and education spaces for the orchestra.

Speaking to PREMIER CONSTRUCTION MAGAZINE about the project, Stuart Hollings from stephenson STUDIO Ltd said: “The brief was well established and throughout the design development stage this was explored further, questioned and tested. The brief was revisited at key stages to ensure alignment.

“The existing St Peter’s building is a Grade II listed deconsecrated former church, and is currently used for rehearsals. The new extension will provide additional rehearsal, education and support spaces with a café facing onto the public realm. When the Hallé aren’t using the building the venue will also be available for hire as a truly unique space for events and weddings.”

The new extension, to be known as The Oglesby Centre at Hallé St Peter’s, will provide a new façade to the building which will front onto Cutting Room Square.

Stuart said: “Conceived as a classically proportioned modernist metaphor of the existing listed building, the form of the extension is ‘cut and carved’ out of the solid, maximising daylight into the building and creating visual links with the public square opposite. Influenced by the proportions of the golden rectangle and expressed as a robust brick plinth at street level that cradles the first floor main rehearsal space.”

The new extension will also provide a kitchen, education workshop facilities, individual practice spaces and improved facilities for the Hallé’s musicians and choirs.

Stuart added: “Arranged over a basement, ground and first floor, the accommodation includes practice, education and public café spaces with a unique ‘box in box’ acoustically isolated rehearsal space. Monolithic glass roof lights allows for the rear Grade II listed façade to be on full view from within the new extension whilst maintaining privacy of the rehearsal spaces from the neighboring adjacent buildings. The selected materials make reference to the rich industrial heritage of the Ancoats district with artisan and crafted detailing of roman format handmade brick, raked lime mortar joints, articulated fins and weathering steel.”

Built in 1859, the building was the first Anglican church in the predominately Catholic ‘Little Italy’ neighbourhood of Manchester. The building was listed in 1989 and is owned by the city council and leased to Hallé orchestra.

“The Oglesby Centre at Hallé St Peter’s will be an exciting center piece of the neighbourhood’s redevelopment,” said Stuart. stephenson STUDIO feel there is a successful synergy between the existing building and the new extension, and provides Hallé with a unique and exciting environment to rehearse.”