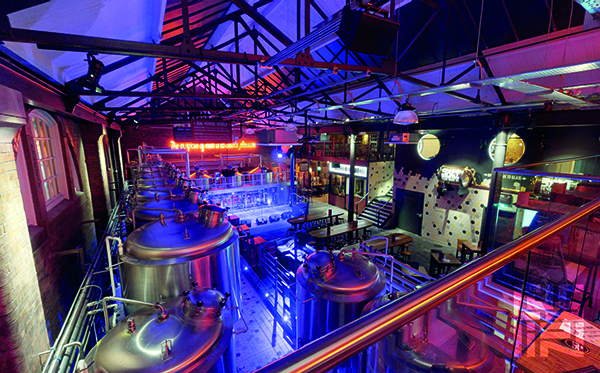 Launched in November 2018, SALT is a micro-brewery on a mission to unify heritage and modern brewing. Their mission is to produce show stopping hop-forward beers and couple them with an interactive brewery experience. Fusion By Design provided the interior design for this 20-hectolitre Beer factory, housed in an iconic piece of architecture, a Grade II listed Edwardian tram shed.

Nadir of SALT Beer Factory talked about its origins:

“We come from a family of breweries, the biggest of which is Ossett brewery which was founded 20 years ago. The initial idea for SALT was that we wanted to brew our own larger for our pub, which Ossett couldn’t do because it didn’t have the kit to do it. Over the past three years, the concept evolved into what it is now- which is becoming a leader in craft beer.

“With SALT we want to build an experience led brand so we created the brewery, the tap bar and the live events space all in one. It’s a working brewery and the tap room sits in the middle of it. That is where we have almost weekly gigs. It’s a truly unique concept. The idea is that people who visit Salt Beer Factory can follow the journey of their pint, through the brewery itself.”

The tap room is the ultimate interactive brewery experience. Situated in the heart of the brewery, visitors can enjoy handcrafted SALT beers with the backdrop and theatre of the brew house around them.

Fusion By Design said: “Our design brief was to develop and deliver a new interactive brewery experience adjacent to the existing iconic public house venue. The ‘HOP’ as it was previously known had a considerable idle space to the rear of the pub, and  the client team looked to convert this into an exciting, revenue creating, usable venue which could both generate new products and educate customers about the brewing experience. The concept is to produce an interactive brewing experience where customers will be able to sit in the heart of the brewery and enjoy fantastic, locally produced fresh beer.”

In more detail, each stage of the brewing process is on show and sign-posted so visitors can follow the journey of their pint from raw ingredients to dispense at the bar.

At night the brewery transforms into a contemporary beer hall with a resident DJ spinning vinyl soul, funk and hip hop classics. The beer factory doubles up as a live music venue with a state-of-the-art PA system and professionally lit stage. Customers can oversee all the action, take in the spectacle of the brewery and play shuffleboard on the Mezz or kick back on the New York Loft.

“We say our mission is to couple modern brewing with heritage. The name SALT comes from our home land, the UNESCO World Heritage village of Saltaire, which was built by a super progressive workers right pioneer in the 1800s. He built SALT mill and the village to go with it – the brewery links this with the name, and so it can tell that story.”

A nod to the industry and this history is evident in Fusion By Design’s use of raw metal, natural timbers of the furniture and are elevated by leather upholsteries and deep textile patterns. The brands colour palette of honey yellow and teal are evident throughout the scheme, as are the brand iconic hexagon patterns symbolising the honey aftertaste of the beers they produce.

“There were challenges; the fact it is a Grade II listed building within a world heritage site meant that planning permission was a tough one, and we were limited to what we could do with the space. “Because of that, because it’s not just a brewery, tap room, or live events space, but because it’s all in one; to get it to work together smoothly was also tough. Its working but it’s a showpiece too, so when it’s open to customers it has to be sparkling clean, and it’s not as straight forward as it could be but it all adds to the beauty of what we’ve built.

“For us, SALT Beer Factory is huge. We’re making exceptional beer, with awards to show for it. The beer is the foundation of our brand and having SALT as a live music space and a tap room means people can visit the real life embodiment of that brand. It’s great being known for our beer, but also having something that physically represents the brand too.” 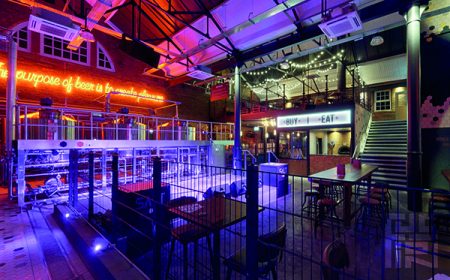 SSV Limited sells and installs a full range of stainless steel tanks and brewhouses, as well as boasting a complete brewery parts shop.

The company has just celebrated its fifth anniversary and already boasts an enviable portfolio of projects for a wide range of clients such as By The River, Brains, Tiny Rebel, Freedom, Heineken and Williams Brothers. Most recently SSV was involved with the Salt Beer Factory, supplying the following equipment:

The project encompassed a number of challenging aspects, including restrictions imposed by the fact the venue is a UNESCO site of special interest, but SSV was still able to deliver high quality products within an extremely tight timeframe.

A spokesperson for SSV said:

“The whole team at SSV Limited was excited at being chosen to work with the team from SALT to deliver their fantastic new vision. We felt our brew-bloc 3 would be the perfect brewhouse for them due to the flexibility and capability when it comes to being able to produce a wide and varied portfolio of beers.

“The site looks fantastic and we can’t thank SALT enough for their support in selecting us to be their equipment supplier in this exciting new concept.” 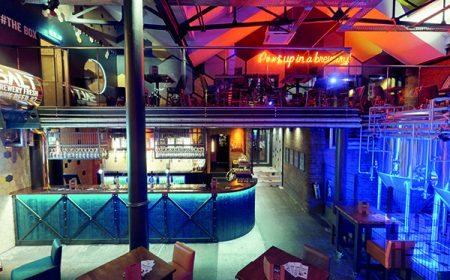