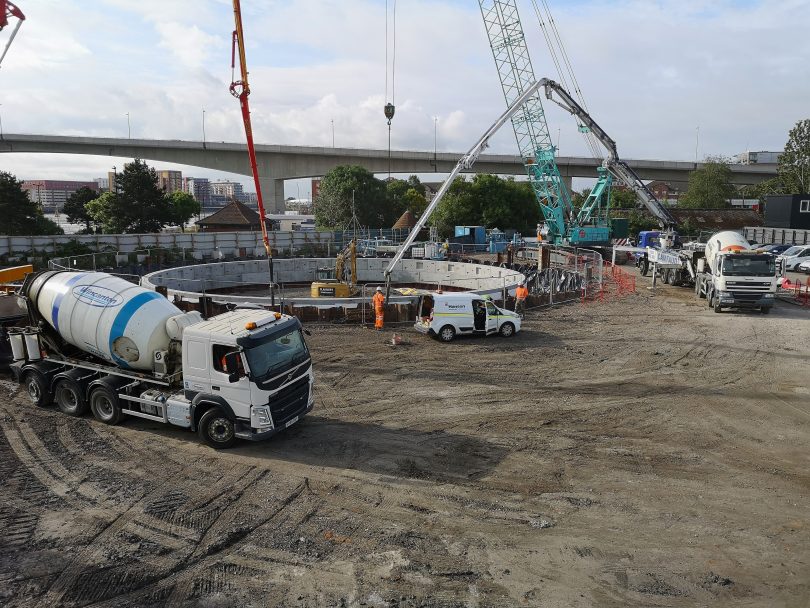 The 3.6-hectare Chapel Riverside situated on the banks of the River Itchen handles a third of Southampton’s waste water and so regeneration of the land presented several large-scale engineering challenges. Inland Homes has invested £10million in civil infrastructure, which included the careful demolition and relocation of the three pre-existing overflow tanks for Southern Water, as well as building a new 210m sea wall and flood defences.

The tank is vital for storing overflow waste water during heavy rain and, by sinking it underground within a deep precast segmental sealed concrete shaft, this solution reduces the risk of water contamination and eliminates any potential odours. It also uses far less space at ground level, releasing more land and greatly improving the appearance of the site. The land above the sunk tank will ultimately form part of a public plaza with direct access to the new waterside promenade.

Mark Lansbury, Project Manager for Inland Homes, comments: “The relocation strategy and design solution for this has been at the forefront of my daily work life for the last three years. The importance of this work cannot be understated, as the new asset is fundamental to the entire development’s viability. The delivery of such a large scale civil engineering asset by a developer for a water authority is almost unheard of.”

Kain Dear, Construction Manager for Inland Homes comments: “This has been a hugely complex and challenging engineering project so it is comes with great satisfaction to see the shaft for the storm tank successfully constructed. Working alongside our specialist contractor B&W Tunnelling, we’ve managed to get over some huge hurdles to deliver this on time.”

Inland Homes is currently working on the third phase of Chapel Riverside, which will deliver an attractive modern waterside community with a total of 457 new homes in partnership with Southampton

City Council. Formerly the city’s main depot and recycling centre, the regeneration of the site has been technically challenging but the construction of the new scheme is on plan to complete by 2024.