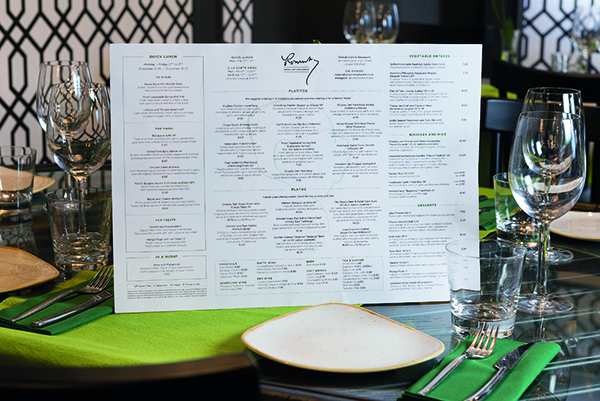 Back in 2014, frustrated that Filipino cuisine was Asia’s best kept culinary secret, Rowena Romulo decided to do something about it.

The result was Romulo Café. Opening in Kensington High Street in March 2016, it was an overnight sensation, seducing the capital with its food and its ambience. Some three years and countless awards later, Rowena and managing partner Chris Joseph decided that rather than sit on their laurels, it was time for their creation to undergo a subtle reinvention.

Officially reopening its doors on the evening of Friday 26th July and henceforth known as Romulo Café & Restaurant to further emphasise its fine Filipino dining credentials, guests here will discover an invigorated offering that still keeps the heart and soul of the original.

The interiors have been refined by the design team at award-winning agency CADA (Fortnum & Mason, The Dorchester,  Farmacy with ITS acting as the projects main contractor.

The first thing guests see on entering the site is a reconfigured layout. The front and back sections of the restaurant are now a cohesive whole, while the striking new bar, with its brushed satin champagne nickel edge and skirting, has been moved for tables to be positioned in the window.

Taking as their starting point the restaurants heritage, but ensuing classic elements are used alongside the contemporary, the designers have further reinvigorated the space with geometric black and white wallpaper panels which form a spiritual link between London and the Philippines, as this is the signature style of the three Romulo restaurants in Manila.

David Anderson of CADA Design talked more in detail about the refurbishment. He said:

“This refurbishment project was all about making, in terms of design, what was already good, that bit better for Romulo Café & Restaurant. We referenced the palette and design style of the restaurants in Manila to create connectivity between the Manila sites and the London site. 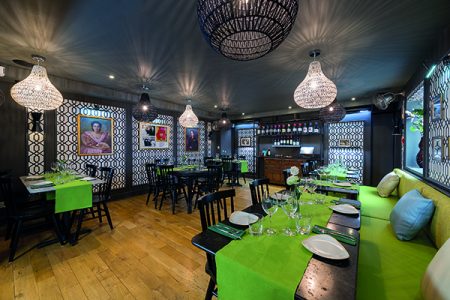 “Already Romulo has been experiencing an increased footfall of diners. The biggest challenge with a project like this was timeframe- we had some shifting to do, we needed to remove a whole bar from the space, and with a project like this, you don’t know what you’re going to find until you start moving things, and that’s where the time challenge came. But everybody involved, went above and beyond to get it finished on time.

“For an impression from the street, we needed a lot of stand out. There’s barely any footfall on this section of High Street Kensington, it’s mostly traffic, so we’ve got three seconds to make an impact on people in vehicles. With the colour palette and the changes we’ve made, it was all to make it stand out; things like the lime green balustrades contrasting with the grey were used to create this stand out element.”

A palette of greys, whites and light blues with strong accents of lime green, new lighting and reupholstered banquettes (also in lime green) are offset by beautifully reframed historic photos and documents featuring Rowena’s Pulitzer Prize-Winning grandfather and late General, Carlos P.Romulo, who was the inspiration behind all of the family’s restaurants.

Complementing the interiors is a new menu that keeps all the existing favourites and signature creations but in a more pared down form.

“We’ve had terrific feedback; the clients and customers are very happy. There’s been a massive increase in walk-ins. One of the challenges for us was to create and stimulate a lunch time trade, and even within a few days we’re starting to see that happen. People are raving about the fact that Romulo now has, in my humble view, a design that matches the quality of the food it puts on its diners plates.

“We work on a lot of big projects all over the world, and this, in context was a smaller project but it’s not so much about size, it’s about people and a desire to try and help and improve the situation. It’s a sense of commitment that you want to make their business better than it already is, by applying the skills that you’ve acquired over the last 35 years and I’m very proud of that.”

On top of all of this, Romulo Cafe & Restaurant is delighted to announce the launch of its new ‘prix fixe’ lunchtime menu, from Monday to Friday, 12pm-3pm. This is not only a great value ‘express’ offering for time-pressed diners, but also a fantastic introduction to Filipino cooking for those being introduced to the cuisine for the first time. Created by executive chef Jeremy Villanueva, all dishes continue to be made with the finest of seasonal local ingredients. 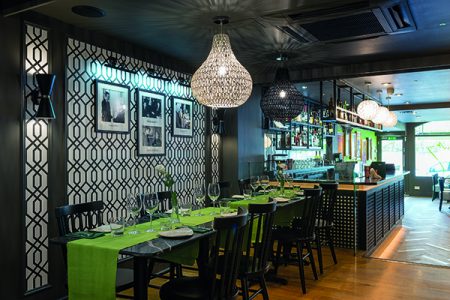 An interview with Martin Quirke, Managing Director of ITS:

How did you get involved?

“We were approached by CADA Design, as they had a client that required a very fast track fit out with minimal lead time, and they needed a company who could react very quickly and was very flexible, but also with the adequate resources to build the joinery elements that went with the project requirements.”

What did you have to do when you got on site? Were there difficulties or did it go smoothly?

“There were lots of challenges because there was no lead time. What we had to do was work with CADA Design to compromise on materials, so we had to source material that had the look and feel CADA  wanted but it also didn’t compromise the design. “

How long it did it take?

“Eleven days start to finish. Re-doing the restaurant inside and out, and that included respraying all their existing furniture as well. In all my time, (I’ve been working in this area since 2000) I’ve never been involved with a project so fast tracked as this. But both the client and CADA are absolutely delighted with the outcome.”

With all of its challenges, how important has this project been for you?

“It’s really important, and I’m really proud of it. I’m proud of my entire team. I was away on holiday five days into the project and so I was working it from there but also I have my entire team behind me. I’m very proud and this project shows the world what ITS can do. Even though we had eleven days, we did not compromise on quality, we delivered and it was fantastic.

“It’s also important as a reality check, to know what you can do if you really put your mind to it. We’re challenged on a regular basis, and it’s a springboard for us to work with other companies because they know we can do really well, and that’s what we do best. We like to help people.”