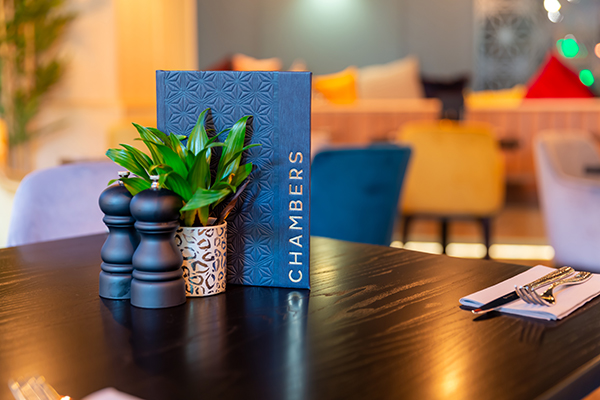 Chambers Restaurant reopened earlier this month with a new look and menu and hopes that the memories made there since it opened in the 1990s will still be honoured after the extensive, but much needed, renovation.

From a drinks hotspot to a place to enjoy Asian cuisine or simply a dance, Randalls’ Managing Director Gavin Reid described his vision for the newly refurbished nightclub, bar and restaurant as a “one stop shop.”

Brian Tyrell and Doug Langlois from Tyrell Dowinton Associates were the designers, and a big part of the challenge of the new Chambers design was finding ways to marry up the different zones of the venue with lighting and design elements.

Closer to the entrance is the eating area, which then leads onto the main bar before visitors finally reach a bigger dancefloor and stage area due to the mezzanine with its own bar being lifted over the top of it. The higher level can be used for bigger public events, or private functions.

The design is contemporary, featuring a palette of gold and purple/blue shades, with wooden flooring and banquette seating providing private spaces. The frontage of the building has also been altered with the addition of new, much larger windows to allow more natural light into the interior.

In addition to the new design, the club is now fully accessible for wheelchairs and those with mobility issues thanks to a lift that has been installed to allow access to both the dancefloor and the mezzanine level.

Putting more emphasis on the food offering and service standards, Mr Reid hopes that, although the experience and feel of the club may be quite different, the ‘new’ Chambers will still remain true to its roots by screening sports events and playing live music.

Part of that vision is the venue’s new food outfit ‘Smoke’, which will offer “Asian soul food,” as well as cuts of meat cooked on a special Robata charcoal grill.

This new offering will allow Chambers to be used regularly throughout the week rather than just being a night-time venue on Friday and Saturdays as it was before. (This is in addition to the live music offering and the screenings of sporting events that fans of the ‘old’ Chambers know and love.)

When it comes to drinks, the new space needed a new drinks menu and now includes a range of music-inspired ‘Rocktails’ featuring all the greats – ‘Gini Hendrix’, ‘Rocket Man’, ‘Under Pressure’ and ‘Uptown Funk.’

Mr Reid, who was Manager of Chambers for 10 years, said “The kids now, the 25 year olds, their parents were that age when they were drinking in here. Wherever you go in the world, if somebody knows Jersey, chances are they’ve been to Chambers. The great thing about it now is people can still recognise it as Chambers.”

Based in Jersey, Eagle Eye Security has been in operation since 2001 and has been under the ownership of Gary Cavanagh since 2002. The company works on projects in a variety of sectors including domestic, commercial, retail, hospitality and local government. Longstanding clients include Roberts Garages, Radisson, Sandpiper CI and the Longueville Manor Hotel to name but a few.

Most recently, Eagle Eye was approach by another existing client, Randalls, to exchange the existing CCTV and alarm systems at Chambers restaurant with state-of-the-art replacements.

“We were delighted to be instructed by our client to work with them again. It signified that we have continued to meet their high standards over the length of the successful business relationship.

“We pride ourselves on a high level of customer service, prompt response to customer needs, and value for money.”