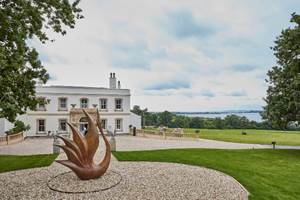 Anca comes with a wealth of hospitality experience having spent formative years working in America and Dubai. After working closely with Michael at the Bath Priory Hotel as restaurant manager, she then went on to spend four years working for Sat Bains at his Restaurant with Rooms in Nottingham as manager before joining Lympstone Manor as assistant general manager in 2017.

“I am excited and grateful for such a wonderful opportunity. Being part of the Lympstone Manor team from the beginning has been an amazing journey so far and I can’t wait to see how this will continue,” comments Anca Paraschiv.

“Firstly, I’d like to pay tribute and thank Scott for his service these past three incredible years, I wish him well in his future. Anca is one of those rare people that have the mix of determination, attention for detail and total commitment. She has proved over the past three year to be a very capable manager and her appointment to general manager is a natural progression and one that she thoroughly deserves,” Michael Caines Chef Owner of Lympstone Manor.”

With the new general manager appointment also comes a management restructure after 2019 saw considerable growth. Several other promotions and developments within the team pave the way for future developments planned for 2020. These plans are to be revealed in the new year.

Jordan Denning, former senior sous chef, has been awarded the promotion to head Chef at Lympstone Manor. Jordan has worked with Michael for over nine years and began in the kitchen as a college student working for Michael at the former Royal Clarence Hotel in Exeter and has since worked with Michael at Gidleigh Park, Williams Formula One Racing team and at the recently awarded 2 Michelin starred Green House in Dublin before returning to join the opening team at Lympstone Manor when it opened in 2017.

Steve Garrod re-joins the team as assistant general manager. Steve first arrived at Lympstone Manor in March 2017 and was part of the opening team holding the position of restaurant manager until August 2018 when he took his expertise to the Bath College as a lecturer in hospitality. Spending a year sharing his knowledge through teaching Steve decided to return to Devon and take the next step in his career.

Emma Bowen has been promoted to the role of operations manager, a newly created position. Part of the opening team, Emma is highly regarded by her peers for her exceptional customer service and experience having worked at Gidleigh Park and The Grove Narbeth before returning to Devon to join Lympstone Manor when it opened in 2017.

Paying tribute to these promotions Michael said, “Our business is all about people and seeing these young staff develop into these roles over the past 2 and half years fills me with pride. As a team we continue to work together to deliver exceptional service to all our guests, whilst promoting a culture that nurtures talent and develops their skills.”

The team at Lympstone Manor continues to grow and the recent promotions are a testament to Michael’s ethos to promote from within and his ambition to develop and grow passionate individuals in the hospitality industry.

For eight years, the Michael Caines Academy has nurtured the region’s future generation of talented restaurateurs, chefs and waiters. High profile experiences, challenging practical and theoretical workshops and masterclasses from the best will drive students to achieve excellence in hospitality.

2020 is set to be an exciting year with exciting developments to be announced shortly both within Lympstone Manor and outside of. For those looking for the next step in their career, and looking to join the team at Lympstone Manor, CVs can be shared here: https://lympstonemanor.co.uk/about-us/careers/.