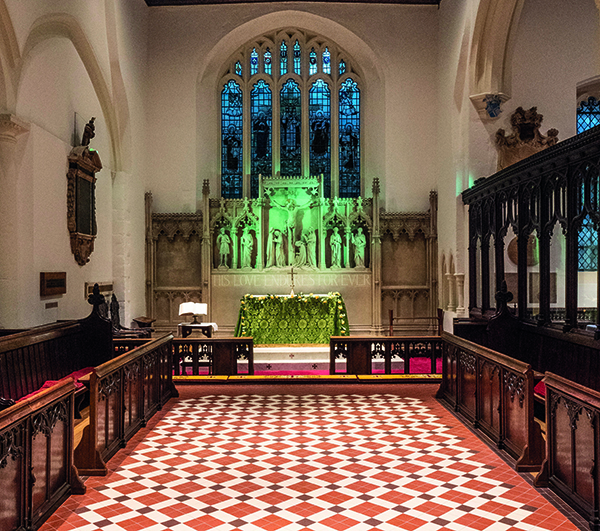 The oldest building in Watford, the Grade 1 listed St Mary’s Church has been magnificently refurbished, in a demanding project requiring the specialist expertise essential to work on a building of such national, historical and architectural significance.

The scheme was designed by MSB, with Heritage Building and Conservation as main contractors up to May 2018, after which the works were taken over by Cuffe plc.

The church has stood in the centre of Watford since the 1200s, although the building seen today is mainly 15th century. The interior was restored in the mid-19th century by the architect J T Christopher and included the provision of pews designed by George Gilbert Scott.

The construction of the church office, vestry, and organ housing is 20th century, as is the later church centre annexe, dating from 1979.

More recently, the church’s visibility from the high street has been improved by the removal of shops and increased pedestrianisation. In addition, the introduction of childcare and pre-school initiatives has given further impetus to its growth within the community.

However, the interior of the church with its plinth-mounted pews, limited its use for community purposes. It was therefore necessary to install new seating in order to offer contemporary levels of comfort and flexibility more appropriate to modern expectations and to the creation of a new community facility in the town centre.

In addition, there were issues concerning accessibility for wheelchairs up to the dais. Further, heating, lighting, and audio-visual facilities needed to be brought up to contemporary standards of efficiency and quality.

MEB Design was appointed by the Parish Church Council in 2006, to advise on the development of this project. Full statutory approval for the project including the removal of the pews was achieved on 2017.

Works commenced on site at the end of 2017. The project encompassed the provision of a level stone floor incorporating underfloor heating, in place of the pews and plinths – although a number of pews were reused within the chapels.

Des Hill of MEB Design commented: “Reducing the level of the subfloor revealed the presence of 13 vaults, most of which had not been previously documented, and most also containing coffins. It was then necessary to protect the integrity of these, whilst minimising any effect on the heating and finished level of the new floor.”

Prior to the reinstatement of the stone floor, in May 2018, the initial building contractor went into receivership, necessitating the appointment of a new contractor. Work recommenced in October 2018 and was completed in March 2019.

Great efforts were also made to reuse as many of the remaining pew ends, frontals and as much of the timber as possible within the church’s new furniture and fittings.

Des Hill concluded: “Renewal of lighting and redecoration have transformed the appearance of the church interior. The liberation from the constraints of the previous pews and improvements in comfort can be seen to contribute to the creation of a new community facility and venue in the centre of Watford.” 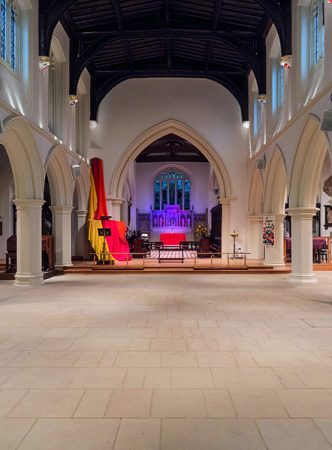