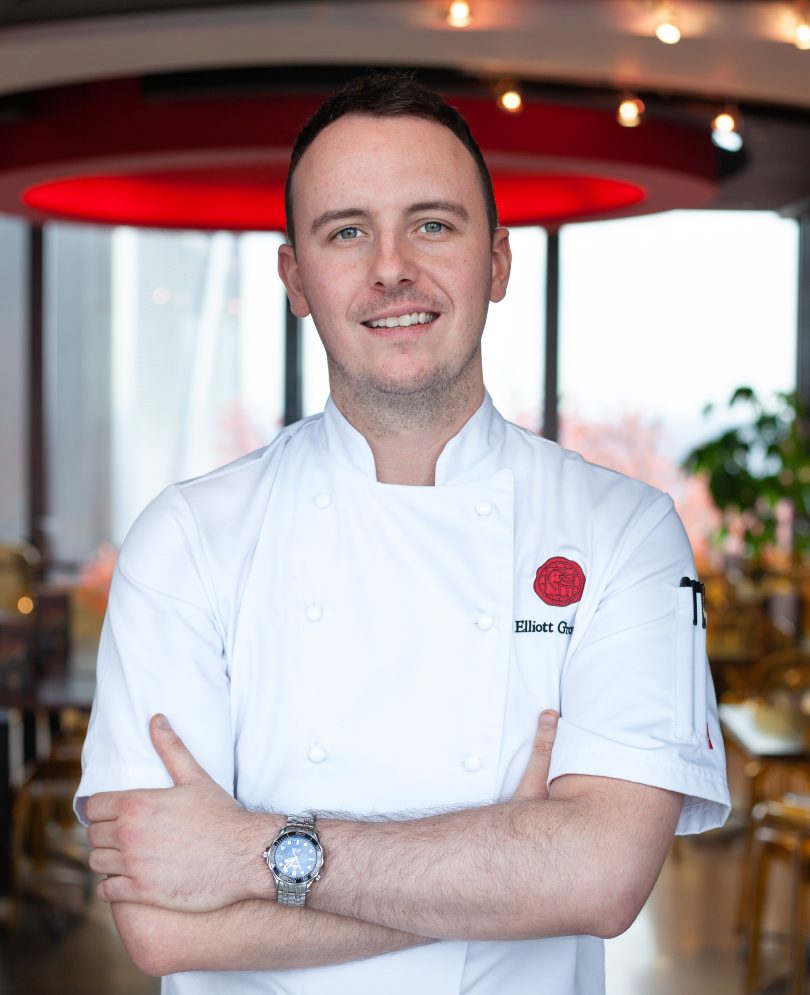 With a wide range of London successes under his belt, Chef Elliot brings his expert techniques and creative culinary skills to the 40th Floor

“When you have the freshest ingredients, anything is possible,”  Elliott Grover

Duck & Waffle London proudly welcomes Elliott Grover as its new Executive Chef. With a wealth of experience, garnered from a decade long run between Mayfair icon Le Caprice, Hix Soho, and Scott’s Mayfair to a recent role at Soho House’s The Ned, it’s a step that comes naturally.

“We’re thrilled to have Elliott at the culinary helm,” enthuses David O’Brien, Executive Director of Operations for Duck & Waffle London. “Between the rigorous pace of our 24/7 operation to the premium quality and craft of our cuisine, he’s accepted a demanding position. It’s clear that Elliot is driven by a challenge. And, that motivation – coupled with his raw talent – is exactly the way we’d like to open the next chapter of Duck & Waffle.”

The Journey to the 40th Floor

Elliott Grover’s love for cooking started on the coast in his hometown of Cornwall. Inspired by the region’s fresh seafood and watching Chef Rick Stein’s Seafood Odyssey on television, he decided to pursue a culinary career and move to London at the young age of 16. He landed his first official job behind the burners at Caprice Holdings’ famed Le Caprice restaurant. Under mentors Chef Kevin Gratton, Chef Mark Hix, and Chef Director Tim Hughes, Elliott moved quickly through the ranks in a variety of the group’s  projects from Le Caprice to Scott’s Mayfair, Hix Soho and finally The Ned, where he became well acquainted with British and American cuisine and the ‘culture’ of the grill. This groundwork easily parlayed into Duck & Waffle’s own culinary propensity toward rustic comfort and tradition.

Finding a Home at Duck & Waffle

Chef Elliott admits he has loved Duck & Waffle since its opening in 2012. Now, as the restaurant’s Executive Chef, he is eager to bring a fresh approach in the kitchen “whilst keeping its classics well where they belong.” As part of the latest seasonal menu changes, Elliot created a wide range of new dishes, from snacks and small plates to raw bar, meats, and sides, which reflect his personal passion for ingredients at their peak, executed in the eclectic style of the Duck & Waffle menu.

Highlights include: TWICE BAKED KEENS CHEDDAR SOUFFLE, a vegetarian dish featuring Parmesan sauce and shaved winter truffles: “It reminds me of when I first started out as a chef… a truly nostalgic dish. It’s rich and comforting and it brings a bit of decadence to the menu.”  Other spotlights include HANGER STEAK with roasted bone marrow, Hereford garden snails, garlic and parsley, and HOG WASHED JERSEY ROCK OYSTERS, which, according to Elliot, “bring American indulgence by way of an exceptional British product.”