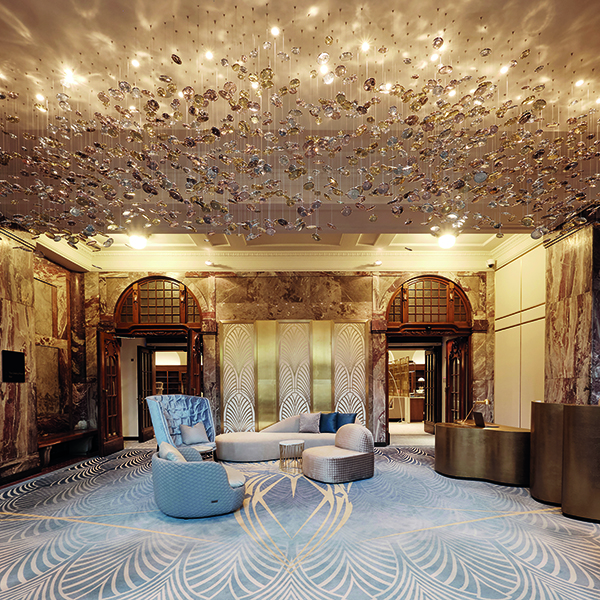 Drawing on the listed 1910 landmark’s heritage and details rediscovered during the renovation, elegant new features uplift the suites with delicacy and lightness. Inspired by the Art Nouveau movement’s rising transition to Art Deco during the construction phase, the “Golden Twenties” culture, architecture and artistic values were sensitively transported into modern times. Blending the nostalgia of individualised, old-style Hamburg apartments with modern aesthetics, 154 apartments span seven categories, with each space requiring its own layout due to features such as soaring ceilings, split levels and water-level locations. Regional architecture touches include the Hamburg baseboard with a higher bottom band and white, rounded-edge panelling. The entry’s walk-through dressing area leads to an integrated kitchen, while Art Deco refinements in taupe, grey and blue with black and gold accents combine into a polished design language.

The Fraser Suites Hamburg has been shortlisted for a 2019 SBID Award in the category “Hotel Bedroom & Suites Design.”

PREMIER HOSPITALITY INTERNATIONAL spoke to Barbara Wiethoff from JOI-Design about the project in a bit more detail.

How did you get involved with the project?
“We previously worked with this client to design the Capri by Fraser Frankfurt, the very first of this brand in Germany, and then we also partnered on their second Capri by Fraser in Berlin. Our cooperation worked quite well, and we felt very fortunate when they asked us to design another brand debut in Germany, the Fraser Suites Hamburg.”

What are some of the standout features?
“The entrance area and the restaurant are particularly exciting since they show the coexistence of the old and the new. As a listed building, the historic features in the lobby were closely protected by the local authority. That meant our design needed to be subtle so it wouldn’t override the existing architecture, yet still be strong enough to clearly announce the new spirit of the building and welcome guests.”

What are some of the challenges you encountered on the project?
“Our challenge was to convert the listed headquarters of the region’s former tax headquarters into a luxury hotel. It was originally designed to create a sense of ‘awe’ as an imposing legal authority rather than an inviting hotel. We needed to lift the heavy, oppressive appearance and transform it into something with elegance, delicacy and lightness.

“In response, we designed a journey through time illustrated by distinct and varied highlights. Inspired by original structural details, Art Deco touches recall the era of the building’s creation and mix nostalgic references to the 1950s, the period of the last major reconstruction. Our interior design brings these epochs back to life, interwoven and sensitively transported to modern times.”

What has feedback been like since you finished the work?
“The feedback has been very positive, with guests commenting that the overall atmosphere feels luxurious and inviting. They enjoy how we’ve integrated the modern comforts required by the building’s new purpose with the architecture’s historic features.”

How important was this project for you to be involved with?
“There are many reasons we are happy to have been part of this important project. Firstly, it was an honour to design Germany’s first Fraser Suites, a luxurious brand that allowed us to develop a sophisticated, high-level concept. As a Hamburg-based studio, it was also a privilege to work on such a prestigious historic monument in our home city. Hamburg residents have watched the transformation of the landmark with great interest, so it has been exciting to unveil our design and invite both our neighbours and visitors to enjoy its spaces.”