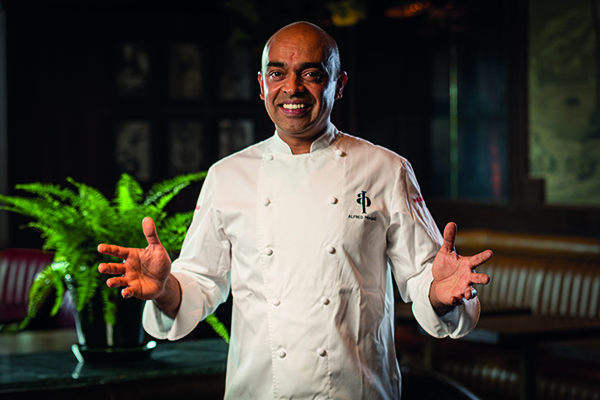 Doolally’s menu has been created in collaboration with Alfred Prasad, one of the most renowned Indian chefs, having been awarded a Michelin star at the age of twenty-nine. His unique take on Indian cuisine, combined with Press Up’s vision for quality produce, excellent service and world class design is what makes Doolally special.

Ann-Marie O’Neill of O’Donnell O’Neill Design took us on a tour of the design of the restaurant. She said:

“Our initial brief for Doolally was that it needed to have more of a theatrical feel to it. And we then developed the concept from there. The project took 5 to 6 months, in ground floor premises, and it’s a large open space. Because of that, it was important to break it down to make it feel like there were lots of individual spaces within it.

“The design highlight of the space is the bar. It has eight sides, meaning that plenty of people can get comfortable and have a drink before their food arrives. We took some patterns from India and used that as the shape of the bar, so wherever you go in the restaurant, that’s an orienting object for customers.

“It has lovely emerald green tiles and images of India set into panels, and it has a very nicely lit background display of an art deco clock that we got made for it. The other focal point is the open kitchen which is at the back of the space, and it’s all quite theatrical being able to see the chefs – there’s a definite buzz to that space.

“To break it up there’s lots of different seating styles, leather button back seats, booths and they’re all orientated in different directions with lots of planting in between to break up the spaces. This works well because if you’re there early on in the evening and the space isn’t quite full yet, you don’t feel uncomfortable sitting in an empty space if you’re in your own little area.

“Lastly, Indian heritage shines through in the artwork on the walls and behind the counter, and it immediately takes you to India. We’ve also covered the walls in photographs of Indian life.”

The origin of the name and word Doolally comes from the town of Deolali, in Nasik District, situated about 150 kilometres from Mumbai. The hill station was established in 1869 and was used as a transit camp for nearly all troops proceeding to and from Bombay and Britain.

It was here that troops, from all over the British Empire including many Irish soldiers, had to await repatriation to Britain after finishing their tour of duty. A town abundant in history and rich in heritage, Deolali was a place where tails of India were documented, poems penned, and stories shared across the world by travelling soldiers, bringing tales of the subcontinent to Ireland.

Alfred Prasad said of the menu: “I feel fortunate to be a part of such a fun food story in Dublin. My culinary philosophy of Heritage, Health and Happiness, lies at the very core of my cooking. For DoolalIy, I have drawn inspiration from the heartbeats of India: bustling streets and bazaars, vast and vibrant coastline and its diverse, eclectic history. It has been a wonderful experience collaborating with Press Up and bringing to you the best of Indian-Irish bonhomie.”

Well-travelled Indian favourites, from tandoor charred chicken tikka to spicy jalfrezi curry, sit alongside lesser known traditional dishes from regions throughout India. The menu also incorporates some less traditional flavours too, with unique dishes that put a creative, fresh and light take on Indian cuisine using the best of Irish ingredients. Chefs have created a menu that can be enjoyed whatever the occasion, be it a quick business lunch mid-week, a celebratory dinner, or a long drawn out weekend feast with friends.

“We have an excellent working relationship with our client, and the nature of that means that you get a better quality of design because we have an understanding of how each works and what we can supply to them, and each time we push our boundaries a little bit further design wise, and this benefits the customer.” 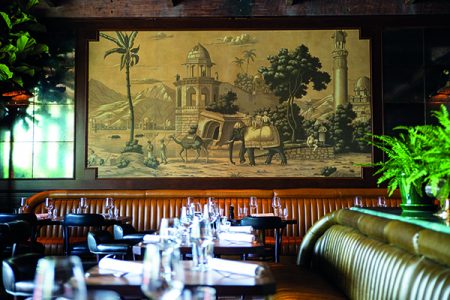