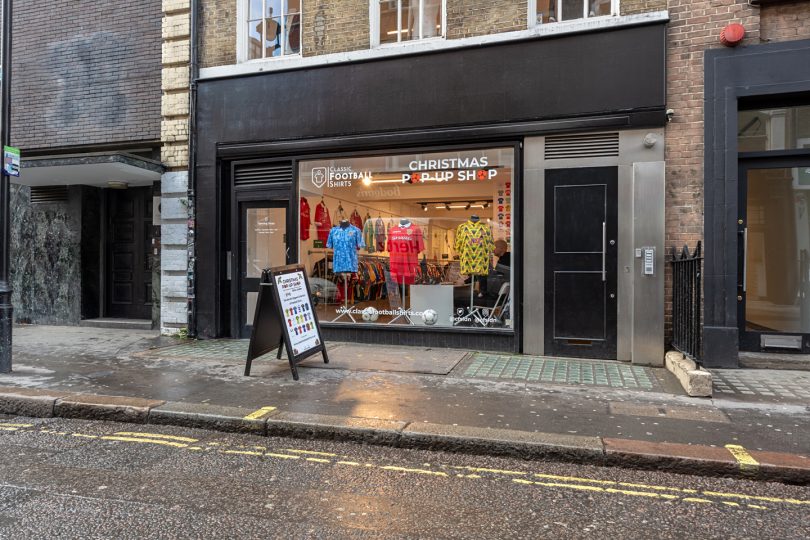 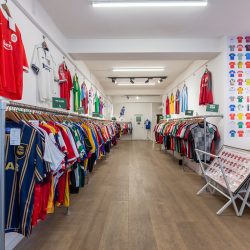 As interest in their collections grew, Classic Football Shirts saw an opportunity to create an original and immersive experience for football fans to see a multitude of shirts within a physical retail environment. What was meant to be a week-long experiment was such a phenomenal success that the company opened various successful pop-ups in London, Dublin and Manchester, on an ever-expanding scale. Storefront played a key role in helping CFS by sourcing and securing various long-term and short-term pop-up locations, which have been an ideal way for the brand to test and experiment with new locations and markets. CFS also decided to open a permanent store in Shoreditch in August last year.

As Ciaran Gold, London Store Manager of CFS explains, “The reason for the success of the pop-up for CFS is that although online is a first response with our brand offering, it very often leads to online followers coming into our stores.  These are essentially fully immersive and experiential places for fans – and nothing like this exists anywhere else.”

For CFS, the pop-up platform is vital to the brand and it’s easy to cater to the different markets with such an abundance of stock. Comments Ciaran, “The London market can change even just from street to street.”  On this basis, CFS most recently decided on an experimental pop-up in Soho, also procured by Storefront, best known for its mix of clientele. The pop-up opened on the 18th of November and will run until the 6th of January next year.

“As the Soho store is a 6-week trial, our aim has been to tailor it to what will appeal to the local people,” says Ciaran. Like all locations, CFS conducted a lot of research and utilised all the data that their online retail platform provided, in order to ensure that their product and service offering would accurately meet the area’s requirements and expectations. Ciaran explains “Soho has a very high tourist footfall, so this particular pop-up can be something more of a souvenir place.”

It is meeting the demands of its customers that is so imperative to the success of CFS. The days of the founding partners using credit cards to fund a few rails of football shirts are long gone.  Since 2009 the brand has consolidated their inventory expansion, working directly with brands and clubs and in 2018 transformed their private collection of match worn shirts into a touring international exhibition.  “We’ve built up an extensive network over the years” says Ciaran. “Today we get shirts directly from the clubs, the manufacturers and private sellers. We even have a direct network of players around the world.”

“Every shirt has a story. We are tapping into nostalgia and memories,” explains Ciaran. “Seeing it and feeling the material is a fantastic experience that cannot be replicated online. Every person who comes into our stores has a lot of knowledge. They will know why shirts differ from game to game and will want to talk about the history of a particular shirt and its heritage.” This is why having staff who are also passionate about football is so important. “When we are stocking more than half a million shirts, it is difficult but vital to be as accurate as possible,” he adds.

CFS matches their online reputation by delivering this ethos into their stores; turning the retail experience into a mini museum and making these engaging and immersive destinations for both tourists and local footfall.  The pop-ups are also ideal platforms for events and have played host to various collaborations and activations, including with two major media partners. Ciaran adds “We have a very visual product and this is a huge draw, as a lot of players are also fans of Classic Football Shirts.” Some of these include Gary Lineker, Dele Alli, Héctor BellerÍn and Rio Ferdinand.

Collaborations with other celebrity personalities have also been a great success. One such event was hosted by DJ Conducta for the series, ‘The Jersey Shop’ in collaboration with Versus, and featured the profiles of UK rappers and musicians and their favourite football shirts. Explains Ciaran, “To view football in isolation is a huge mistake. Football permeates so many areas and it all comes down to the fact that it is the biggest sport in the world. You have people wearing shirts as a fashion item and music and football are also intrinsically entwined… we therefore need to be offering an immersive and blended experience.”

He sums it up with the important statement that CFS stores offer a collective memory for the people. “These are places where rivalry is left at the door. They are all about revisiting memories in the flesh and people can hook these to certain parts of their lives. That’s the magic of it. It’s great to see grown adults transform back into their childhoods. I could go as far as to say they are almost a place of worship,” concludes Ciaran.