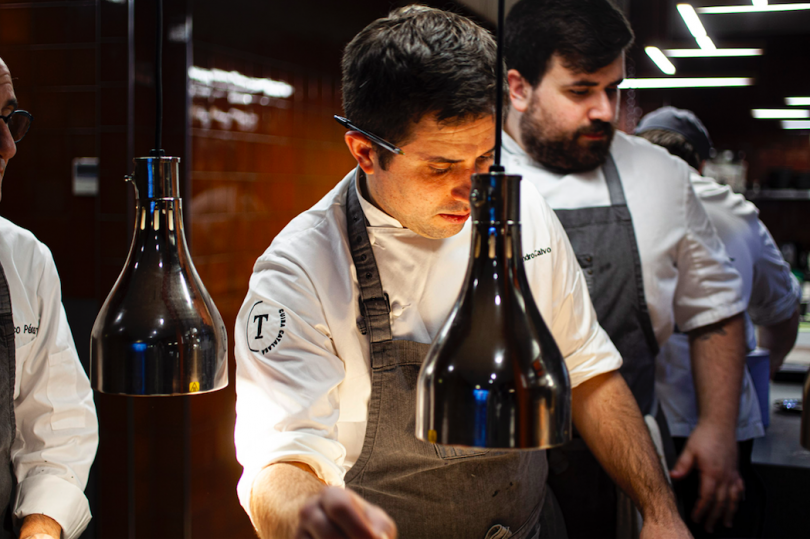 Alejandro Calvo has been appointed head chef at Pep Guardiola-backed restaurant Tast and Tast Enxaneta, on King Street, in Manchester.

Alejandro, who has more than seven years’ experience working alongside Tast’s executive chef Paco Perez, is no stranger to Catalan cuisine and the taste of Barcelona.

Originally from Santander, Alejandro moved to Barcelona in 2012 to undertake an internship under Paco Perez at two-Michelin-starred Enoteca, within the famous Hotel Arts, in Barcelona. Alejandro’s talent and passion mean he has worked with Perez on many of his projects since, including helping secure Perez’s most recent Michelin star, at his restaurant Terra in S’Agaró, in 2019.

Alejandro explains: “This is my first time living in the UK and my first time in Manchester and I’m really excited to be here.  It’s clear to see that in terms of restaurants and chefs the city is growing up a lot.

“At Tast we have a real opportunity to make a name for ourselves as one of the restaurants that is leading the city in its culinary revolution and I’m glad to be a part of it.

“Every single member of the Tast team, from front of house staff to my team in the kitchen, to the directors, lives and breathes the Barcelona vibe that we’re creating in the restaurant. Everyone has a true passion for the food and wants to prove that we’re worthy of being one of the best restaurants in Manchester.”

Tast, which opened in July 2018, is a joint restaurant venture between Manchester City’s manager, Pep Guardiola, colleagues Txiki Bergiristain and Ferran Soriano, and the Fazenda group. It has already proved extremely popular in Manchester thanks to its passion-filled Catalonia cuisine and the authentic Barcelona experience it provides.

Sandra Martorell, director at Tast, explains: “When we opened Tast, our aim was always to bring the joy of Catalonian food to Manchester. Alejandro completely understands this vision. He not only has the culinary skills and experience to bring this to life, from working alongside Paco for so many years, but also the passion to lead the team.

“We’re confident that with Alejandro at the helm we’ll be able to cement ourselves as not only the best Catalonian food in Manchester, but one of the must-try experiences in the city.”