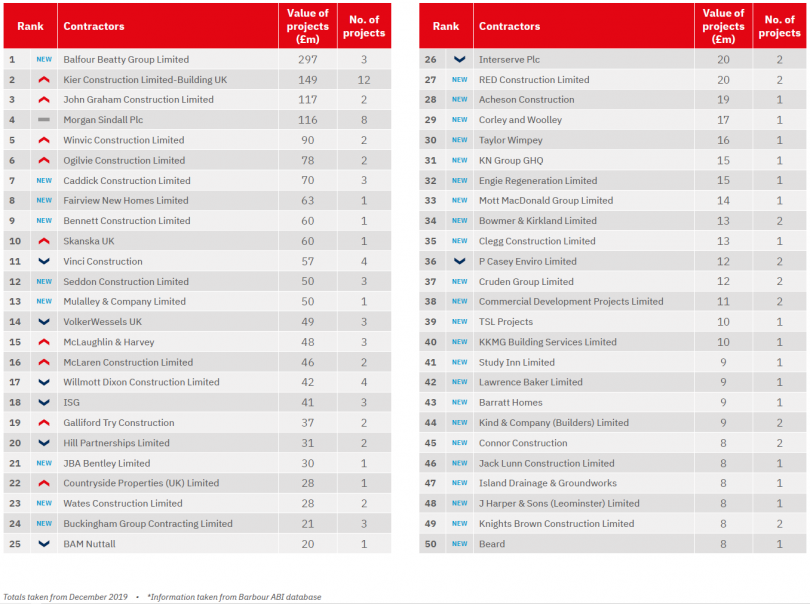 Balfour Beatty took the top spot this month with three contract awards totalling £297 million. The award of the Midland Metropolitan Hospital in Smethwick, a project that was originally contracted to Carillion, contributed £267 million to their total.

Kier Construction and John Graham Construction were in second and third place for December 2019, with a total contract award value of £149 million and £117 million respectively. This month the top three contractors have been awarded a combined 17 projects at a total value of £563 million. In November the top three were awarded a total of 15 projects valued at £781 billion.

Quarterly figures indicate that construction activity in the final quarter of 2019 was down compared to the previous quarter. October-December 2019 saw a total contract award value of £9.2 billion to the top 50. This is a decrease of 9.8% compared with July-September 2019. There was also a decrease of 8.9% on the number of projects awarded in Q4 compared to Q3.

Tom Hall, Chief Economist at Barbour ABI & AMA Research said, “Interestingly this month, the top contract award for December was a project that had initially been awarded to Carillion back in December 2015. Activity numbers in both value and quantity were low in December, perhaps this is to be expected due to companies awaiting the outcome of the General Election, uncertainty of the Brexit outcome, and seasonal effect.”